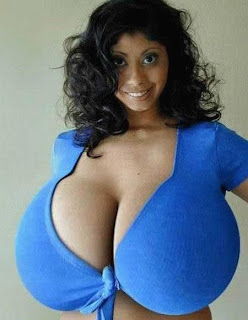 As someone who’s had large, natural breasts for her entire life, the fake boob craze puzzles me. Some women treat their God-given small or even average breasts as if they were deformities.

I just don’t like the way breast enhancements look.

First, unless they’re really good, they look fake. They sit way too high in cleavage and they look hard as rocks.

They feel hard, too, especially if they’re older implants. Just hug a woman who has them. It’s like wrapping your arms around two big boulders.

Sometimes, they don’t age well and look misshapen, even through clothing.

I’m a big fan of the natural thing. Enjoying what you were born with. 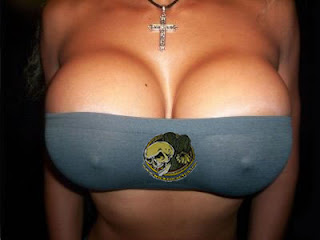 Do these look natural? Are they even attractive? (And don’t you just love the cross pointing down at them? I like to think it’s warding them off.)

The other day I saw a picture of Jessica Simpson with her natural breasts nicely on display in cleavage. It was so refreshing to see breasts a woman was born with! Hot, even. You don’t see that much in magazines.

Women who aren’t used to a large bust sometimes don’t know what to do with it. I just saw a photo of an acquaintance who clearly has had breast enlargement.

And not that long ago.

In the photo, they’re sagging big-time.

She needs to learn to tighten those brassiere straps and “hoist ’em up, girl!”

Strange times we live in.