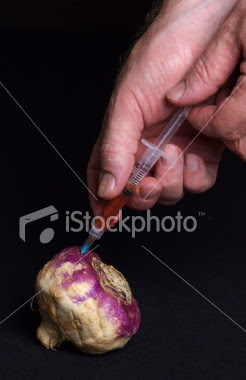 Wonder what this is?

It’s someone trying to draw blood from a turnip. Impossible.

That’s our government today. Too many competing needs and too few dollars to fill them.

It seem obvious to me that a sense of entitlement has pervaded our nation. That people can only think in their own self-interest. The greater good is some utopian concept that they once read about, but has no relevance to their life.

I just don’t think that way.

I’ve paid more taxes than most (and far less than others), but I’ve never complained. I actually thought about it and decided that it was only fair to pay for the infrastructure I use (roads, water, etc). And that the social programs funded by the taxes I pay help make us a civilized society.

But we’re beyond the “civilized society” concept now. We’re into entitlements.

I still pay the mortgage on the property I own that’s seriously under water. I signed up for this and it’s my responsibility. I don’t expect anyone to bail me out of this. I did it to myself.

So can you see why it would both me when people who default on the mortgages get help from my tax money? Why should we pay for personal mistakes?

Sure, we can blame banks that made it easy to finance homes people couldn’t afford. And some of us do. Because the idea of personal responsibility for mistakes we make has disappeared.

I know someone who bought a car that cost far beyond what he reasonably could have afforded. It wasn’t a spectacular car. But it was at least $10,000 more than he needed to pay or should have paid for a vehicle, given his means. Or lack of.

“I’ve never had a new car,” he said at the time. “I deserve it. I’m tired of driving around older used cars.”

Uh huh. He hasn’t paid for his car with money he earned for more than a year. And we–taxpayers–have been making his car payment for at least six months, because he’s been on 26 weeks of the federally-funded unemployment extension. The one that’s paid for by our taxes.

(You know that, right? That anything beyond 26 weeks is funded by federal tax dollars?)

And he’s sat on his ass and not looked for a job, either. At all. We’ve paid for his rent and his food, too. His vacations. Because he feels no personal responsibility for financing his own life. Why should he? We’ve got him covered.

Let’s talk for a minute about the city of Oakland. After an unpopular verdict in the trial of a transit policeman who shot a suspect under suspicious circumstances, the city’s businesses were looted. Those who exercised their right to protest also felt they had a right to steal from local businesses. So they smashed windows and made off with goods that didn’t belong to them.

But, see, this is what I mean. People who let taxpayers cover their living expenses when they are able to work are stealing. From you and me.

They don’t see it that way. They see it as entitlement.

That’s because we’ve done all we can do to promote self interest.