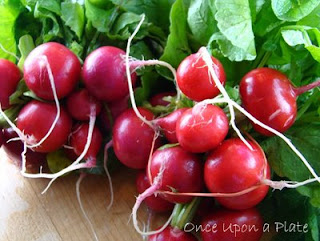 I’m embarrassed to admit that I hurled a radish at M the other week. We were having a…discussion…and I felt he wasn’t hearing me. I’d been slicing radishes from our CSA box for a salad and out of frustration I picked one up and threw it at him.

Well, not exactly at him. Toward him. It hit the wall, instead.

Hey, I could’ve thrown the knife, right? That would’ve signified some serious shit.

We don’t normally argue. First, he’s truly the nicest man in the world. Second, he argues professionally, so I have to be really on my game.  But then, I argue pretty damn well, too.  Still, once in a while he makes assumptions that are way far off the mark and he’s so insistent on them that when he doesn’t hear what I’m saying, I just snap.

Did you know that verbal conflict is actually a style of communication?  I learned it at my parents’ knees, and I’m not kidding.

M. and I are, of course, of Sicilian descent, and our people are passionate about EVERYTHING and boy, can we be loud.

We’re older now and know how to keep those emotions in check, most of the time, anyway. But once in a while, they slip out. 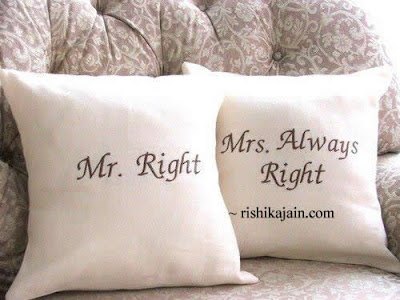 Because that’s what I saw growing up, my style of relationship communication has always involved verbal conflict and it’s been problematic for other relationships I’ve had. Some of my mates couldn’t argue as well and others simply couldn’t tolerate any kind of conflict at all. Easier to pretend nothing was wrong, they thought.

I found this marriage therapist’s blog post the other day very insightful: (he  also described a hurling incident, but not a radish. A shoe.)

I want to emphasize … that different people have different communication styles. I always tell my clients that that’s totally okay. Lolly and I both come from parents who rarely fight, so when we found that our style of communication included verbal conflict, we had to figure out what that meant for us, and if that was okay.

Early on in our marriage, we realized the answer. While sometimes conflict is petty and can be avoided, other times our fights are what bring us closer together. Sometimes in facing the difficulty of challenging emotions and the vulnerability of saying hard things, we pass through the portal of deeper understanding and more intense closeness. Sometimes our conflicts are the very key to ensuring that we understand each other and feel intimate and connected and understood.

So what I’m saying here is that conflict can be a good thing in marriage, as long as it is handled correctly.

Ah, that’s the thing. Handled correctly.  And he goes on to say this:

We can’t control our emotional reactions to things. Our bodies just respond to stimuli. But the thing we can promise each other is that we will sit there, side by side, working through it until both parties feel good, and until both parties understand what is happening.

Lots of wisdom in that.  People talk about “working through it,” but it’s been my experience that few do. They avoid. Someone is usually stuffing their feelings and it comes out in other ways: infidelity, substance abuse, resentment: passive-aggressive behavior.

It’s harder in the short run to work through it, even painful. But it’s a lot less painful than the way passive-aggressive actions cause the slow disintegration of a relationship’s foundation.

So, yeah. I threw a radish at my husband.  We talked it through. And then it was over.

And we ate the remaining radishes in a salad: 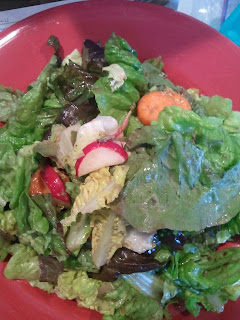 So here are my rules for handling conflict in a relationship:

1. Listen to what your partner is saying.
2. Sit down with open hearts and work through it together.
3. Don’t throw radishes. Or anything else. Unless you really, really can’t help it.