It wasn’t unusual 50 years ago to see this Oldsmobile Cutlass on the road.

What is an Oldsmobile, you ask? It was a division of General Motors and its last car came off the line in 2004. The “Olds” had been on the road 106 years. It was our usual family car.

Oh, and I did have one of these Cutlasses. Not the convertible. In 1977.

50 years ago this day M and I walked down the aisle of St. Ambrose Church in Rochester, NY. I wasn’t yet 21, he was 24. We had absolutely no preparation for marriage. We just knew that culturally, intellectually and in so many other ways, we seemed to be a fit.

That lasted almost nine years and then, to my surprise, we were divorcing. I thought it was the darkest time of my life. I wasn’t sure how I would go on. For a while, I was pretty crazy.

What I didn’t expect?  That divorce would be the start of a big adventure and a life full of so many surprises–most really good–and growth experiences. I had to grow up and as is usual for me, I did it the hard way. That’s just the way I roll.

When M & I divorced, Gloria Gaynor’s song “I will Survive” was popular. It became my anthem. Maybe it was yours, too?

The other day in Safeway that song blared from the speakers and I couldn’t help but sing along. I looked to my left and 20 feet away M was crouched down looking for something on a low shelf. “Here it is!” he called out to me.

Some 26 years after our first marriage we did it again.

And today, 50 years  after we first walked down the aisle, we’ve been remarried 13 years.

Yes, a lot of numbers.

Our remarriage was not anything I expected or even thought I wanted, Because the 26 years in between our marriages were full. Maybe not always happy, but then life is all about peaks and valleys and there were enough peaks to make it satisfying. I am so glad I had those years in between. I needed them.

But when I was going through my divorce I was so painfully uncomfortable I couldn’t see what lay on the other end of all the pain.

And of course now I’m living that happier time.

So on our 50th anniversary I’m here to reassure you that no matter how dark the times, the Universe always has your back.

Yes, I understand many people are going through much darker things than a divorce. All I can say is that no matter what you are going through, there is always a bigger picture. Even when you don’t know what it might be. That there is more to us than what is going on in this life, and trusting the Universe is the best course of action.

Because truth is? There’s really no other viable alternative.

As you think about that, enjoy some wedding pictures from half a century ago. And yes, that was a real Sicilian wedding. We are both of Sicilian descent. 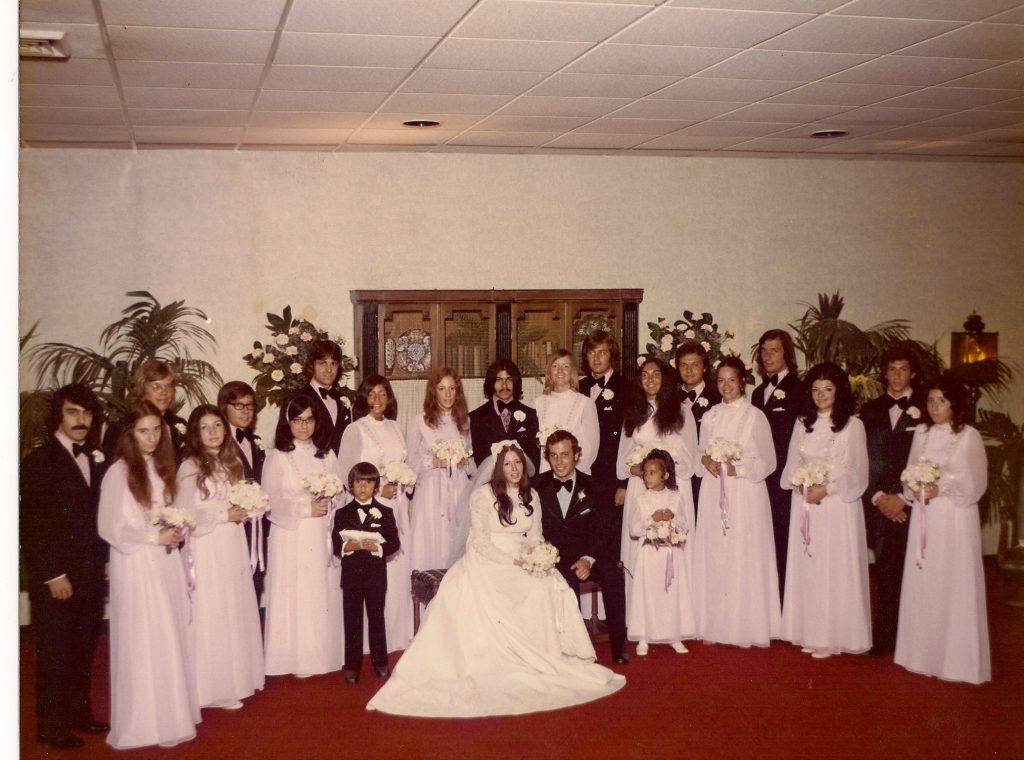 I know, I know. Quantity was the byword of that day. Excess. And that is one excessive wedding party!