A Saturday view of social media

I’m a big fan of Gawker.com, a sort of high-level media gossip site, and read a story the other day whose last graf caught my eye.

It’s a feeling of empty loneliness familiar to many of us who are enmeshed in social networks and broadband grids, blogs and microblogs, emails and IMs, sending so many messages and making so few connections.

Making so few connections. Social media fans would disagree. They spend hours cultivating and expanding their social media relationships. Some refer to their “Twitter family” or “Facebook family.” Some who’ve met via social media actually get together IRL (in real life). They’d argue that all of these relationships, online or IRL are real connections.

And maybe they are–just a different kind of connection. A 21st century one.

I enjoy social media in moderation. They’re a way to monitor some of what’s happening with people I don’t see very often and might not have the time or inclination to spend time with.

Many of my social media contacts are more acquaintances than friends. Which is ok. I like having a small window into their lives. I don’t require a picture window. God knows I barely have enough time to keep up with the friends I’m closest to. 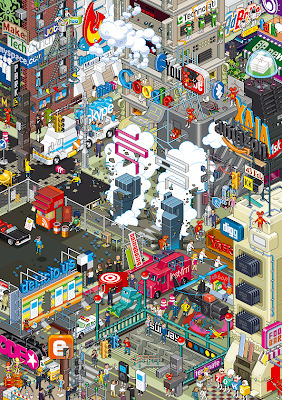 But I clearly see social media’s limitations. Social media are voyeuristic, for one. We can peek without participation– a top-line look, without a lot of detail we might not want to sit through. And it’s voyeurism without guilt. In some ways its superficiality is a benefit, but it’s also a limitation.

They allow us to manage our own image by posting only those things that support how we’d like to be seen. Not necessarily how we really are. Want people to think you’re a man about town? Post only stuff that promotes that view of yourself. Want to be thought of as uber-mom? Post only loving-mom content.

While we all have FB friends who obviously manage their FB images, some clearly don’t. But we form a view of them anyway. Some are so heavy-handed about image management it’s laughable. (Also, we do form our own view of Farmville, Pillow Fight and Mafia Wars fans.)

The term “Facebook family” is a completely understandable shortcut term for the community a Facebook member builds. And for all its limitations, it IS a community. If someone posts about a difficult time or issue, they’re likely to get an outpouring of supportive messages from friends and acquaintances on their FB friends list.

Most of those folks might not be close enough to know a lot of detail and if not for a FB post, wouldn’t know anything about the problem. But they can easily take a few seconds out of their day to post encouragement. And do. Being the beneficiary of that kind of reaching out feels good.

What I fear about social media is that we’ll mistake (or worse, substitute) the more dilute version of relationship–online–for the depth that comes from real-time friendships.

That social media will prevent us from developing more personal and more meaningful relationships.

It’s a real fear, a real risk. It’s far easier to sit isolated at home and have online relationships than it is to actually get together IRL and relate.

I can be critical of social media and especially of Twitter. But what I’m critical of are some of the uses to which they’re put. Go here for more on that:

It seems obvious that social media will evolve over time. Especially Twitter, which seems replete with people who post platitudes and cutesy sayings or hyper-market their (fill in the blank) book, diet pill, CD.

It’ll be interesting to see how the evolution goes. It’ll for sure say something about our society.

And it’ll be interesting to see what.