A slave to the kitchen 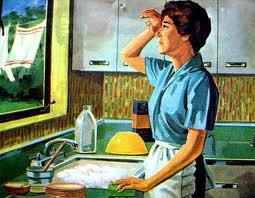 Pictures? you ask?  No time. Dinner was labor-intensive. In fact, we counted 25 person-hours to make this dinner and it included a slow cooker.  Yes.   That many. 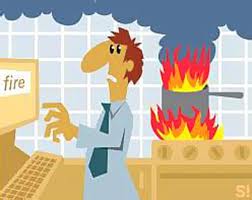 Plus, I set the stove on fire just after our guests arrived. Oh yeah.  Everyone was lucky to get out alive.

Ok, not really. But we were lucky the fire was limited to the stove. If I remember correctly, this is the second time I’ve lit the kitchen on fire.

Here’s the menu and why it took so long:

Slow cooker chicken cooked as if it were in a Moroccan tagine. I bought two whole chickens at Whole Paycheck (next best thing to killing them myself — and totally worth it) and had the butcher quarter them.  But when I got home, I noticed that the recipe required the quarters to be cut in half. So M. did that.

Then I sauteed garlic and onion, browned all pieces of chicken, added stock and turmeric, preserved lemons and after simmering, off to the crockpot. It was the tenderest chicken ever, but next time? More seasoning. Also, will never again buy meat / poultry anywhere but Whole Paycheck.

Couscous. Using my new couscoussiere, we began the process the night before. Chicken broth with bay leaf, peppercorn and spices in the bottom, soak couscous in saffron water, cheesecloth making the seal with the steamer, then steaming, then removing the steamed grains, working out lumps with fingers to make couscous fluffy and light. The next day, we did the exact same thing again to it –yes, you do this twice–and that’s where we got in trouble.

Instead of using double layers of cheesecloth to make the seal between sections, I used a single ply the second time. One edge hung down too low and the gas burner lit it up like a fireplace. What fun! As I watched flames dance around the couscoussiere and weighed whether a fire extinguisher would be needed, I was simultaneously considering which pizza joint we could call for dinner.

But M put it out quickly and all was well. The couscous was light and fluffy, just like the couscous we had in Morocco. But holy crap, it takes a long time!

And then, the Japanese eggplant. Cut, salt and let sit to draw out evil juices. Rinse. Dip in milk, then flour. Fry.  Then soak in a delicious marinade. Make a yogurt-harissa-onion-tomato sauce for it.  This was the tastiest dish of all and would’ve made a great main course.

Can’t forget the cucumber, tomato and mint salad. I accidentally picked up the small bowl of cilantro  (for another dish) instead of mint and mixed it in. Ooops! This was at about Hour 18, so understandable. Result was that I invented a new salad and everyone loved it.

Oh, and the herbed and marinated carrots, which required CORING carrots. I had no idea carrots needed coring. But they do. A new skill.

The citrus/coconut cake called for semolina, superfine sugar, eight eggs and two entire sticks of butter. It required us to candy citrus fruits, another new skill. I misjudged the time and over-baked a bit, but the citrus glaze I made permeated it and softened it up a bit. So did the lemon sorbet that went with it.

Whether deserved it or not, our labor intensive dinner got rave reviews. But after 25 hours on our feet, then a couple more in the kitchen cleaning up, we were exhausted.

I can see why Moroccan women don’t sit–they don’t have time. Seriously.

2 comments on “A slave to the kitchen”