A work of art. Or a piece of work. Unsure which. 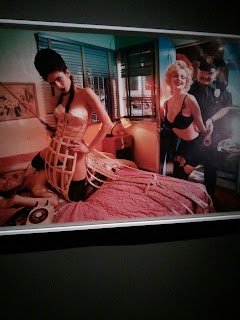 There are some museum exhibitions most straight guys just don’t want to see and in recognition of this, I made plans to see a couple of more girly offerings with a woman friend who lives in San Francisco and, who, like me, is also a member of the two San Francisco Fine Arts Museums.

Armed with my Kindle, I hopped on the train in San Jose and an hour later was jaywalking over to her car at 4th and Townsend. Our agenda was to just see The Cult of Beauty: The Victorian Avant Garde at the Legion of Honor Museum. We thought we’d have a latte at the museum cafe, walk through the exhibit with a docent, have a light lunch and she’d drop me off at the train for my ride home.

The docent was very nice, but a bore, truly, she was. She told us we’d be with her an hour, but when 20 minutes had passed and we were still in the first gallery struggling to stay awake, my friend and I wandered off to view on our own paintings by Whistler, Rosetti and others, as well as furniture and other decorative arts from the 1860 to 1900 time frame.

So we finished up and dropped by a little French cafe for lunch. Its toy-filled children’s area guaranteed we’d share our lunch with lots of snot-nosed kids, many of whom clumsily staggered by and grasped onto our table, probably taking their first steps.  I worked overtime with the hand sanitizer. Our conversation, though, was good. Writing, theatre, health and family. Friends and jobs and husbands. Life. Laughter.

But by lunch end, we just weren’t ready to call it a day.

“Let’s go by the deYoung and see the Jean Paul Gaultier exhibition,” she suggested. “It’ll save us a second trip.”

It’s always an adventure to drive with this particular friend, because I serve as “assistant driver,” even if she doesn’t listen to me. The last time, at dusk, we nearly collided with a light rail train. So I knew that driving across the city with her would be an adventure.

“You just ran a red light,” I offered.
She didn’t respond.
“I mean, seriously. That was a red light.”
“Really?”
“I guess you don’t give a shit, right?” I suggested.
She smiled. Like the Cheshire cat.

We finally pulled up near the deYoung. No parking to be found. It was Holy Thursday and it seemed like everyone in town was seeing the Gaultier instead of stopping in at church or shopping for their Easter dinner.

She finally scored a strange parking space in the middle of the street. Other cars were there, and the space ahead of them was marked Bus Parking. But I’d never seen this particular public parking configuration before, so I was sure we’d be towed.

“Are you sure this is a parking space?” I offered.
She parked there anyway and off we went.

“I’m parked a little further from the museum than I thought,” she said. “Want to walk through the woods?”

“Sure.” I pictured a shortcut stroll through a wooded glade in Golden Gate Park.

She walked me to a trailhead. The dirt path went up at a 45 degree angle through dark, cold and windy woods.

“Are you fucking kidding me?” I asked, giving her the hairy eyeball.

She laughed and we continued on the level sidewalk. I wasn’t the least bit embarrassed, even when I considered she is 20 years older than I and a few years ago had her leg surgically pinned back together after being hit by car when (walking) in San Francisco.

See, this is the great thing about being with friends. You can say exactly what you mean. And they get it. Then again, it just occurred to me that perhaps she’d only offered that shortcut for effect and, knowing exactly what I’d say, had no intention of doing it. It’s a possibility. She’s complicated.

But the Gaultier exhibition made it all worthwhile. 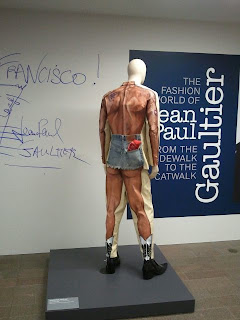 He’s wild, he’s edgy and he’s been around a long while. 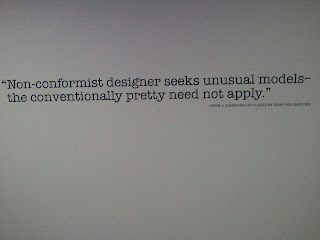 A call-for-models like this is irresistible, even though from the look of the couture on display, they were all size 0 or less. They may have been homely but they certainly were teensy weensy. 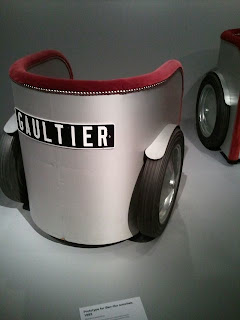 His chair on wheels (and loveseat on wheels) were very cool. 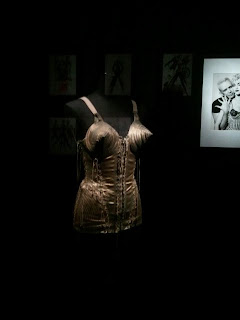 He’s best known for this iconic outfit worn by…Madonna. She is tiny. 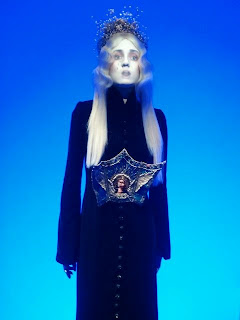 The most marvelous part of this exhibition’s staging was the way curators took blank-faced mannequins and projected film of talking faces onto them, so it looked like the mannequins were alive and talking. Some of them even looked down at us as they spoke. It was really, really cool.

I have no idea what he calls his creations, but I certainly gave them some names of my own. This I call Two-faced and it’s the rear view of an outfit. 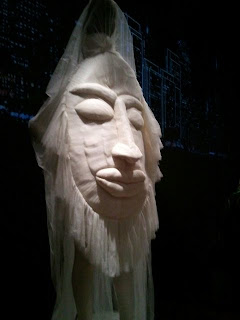 Who wouldn’t want to call this Lip Service? 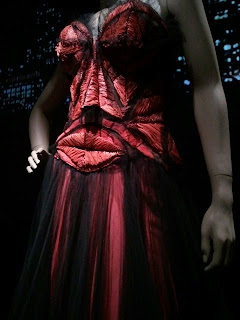 What are those croissants doing on that dress? Shooting From the Hip. Or really, Stabbing from the Hip. It’s a combination evening gown and sex toy. 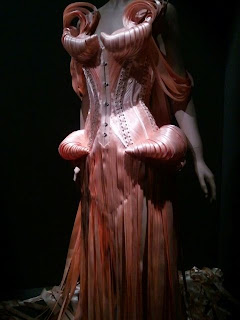 I call this one Don’t Give Me a Hug. 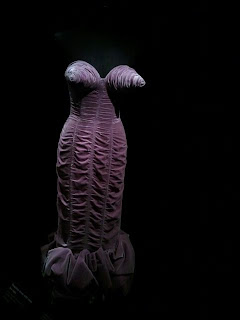 I can not picture a single argument that would convince my husband to wear the men’s bellbottom outfit below. 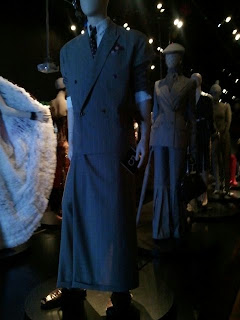 And as much as I loved this man-skirt ensemble and can think of at least two exes it would look great on and who might even consider it, there is no amount of money that would get M. into it. None. 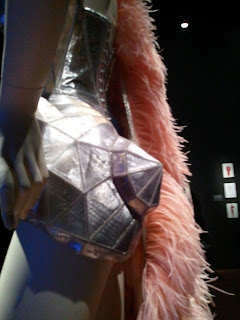 This ass decor is convincing evidence that male fashion designers hate women. I don’t know any female who would appreciate a parasol sticking out of her butt cheek. 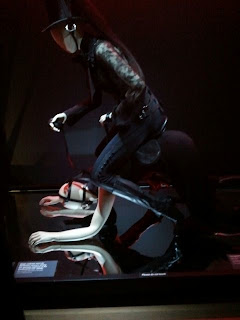 This is reminiscent of the position my dog Riley took with his little girlfriend, Lexi, the other night, even though he is neutered.

It was wild, visual overload. Much more than I can even depict here and I got busted by Security for taking video, do I don’t dare post it.

Afterwards, we made our way out of the crowd and began the long walk to her car. I saw a police car and then a tow truck go by. I wondered, idly, if we were being towed, but I didn’t say anything.

I was much relieved to see her car right where we left it. We got to the train and I got home safely.

And next time we plan a museum outing in the city, I’ll wear my hiking boots.

2 comments on “A work of art. Or a piece of work. Unsure which.”