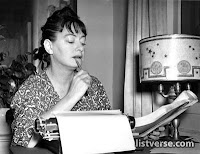 Dorothy Parker was a member of a fascinating group of witty NYC writers, critics and actors that formed –organically– as a practical joke, originally: The Algonquin Round Table. They correctly called themselves The Vicious Circle. Every day from 1919 to 1929, they met for lunch at the Algonquin Hotel.

They were lunches replete with wisecracks, wordplay and witticisms that spread across the country through the newspaper columns of some of the members.

It was a fascinating, creative group who earned national reputations for their contributions to literature and for their sparkling wit.

Dorothy Parker is, of course, my favorite. Some of her sharply clever witticisms:
• You can’t teach an old dogma new tricks.

• I require only three things of a man. He must be handsome, ruthless and stupid.

• Take care of luxuries and the necessities will take care of themselves.

• If you want to know what God thinks of money, just look at the people he gave it to.

• It serves me right for keeping all my eggs in one bastard.

• This is not a novel to be tossed aside lightly. It should be thrown with great force.

• She runs the gamut of emotions from A to B.

Charter members of the Round Table included:

I would’ve loved to have belonged.