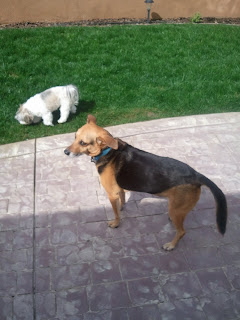 Don’t ever underestimate a dog.

Riley is our alpha, although he is only 10 lbs to Little He’s 40 lbs. Little He is a hound, a rescue dog that M. has had for a dozen years. He’s a really nice dog: sweet and clearly M’s dog.

His muzzle’s graying now, but he can still be high strung and kind of rambunctious as he jumps around doing play bows on his long, loping legs.

Little He’s never, ever been alone, nor has he ever had alpha tendencies. He’s pretty passive. When M. had three dogs, he was third in rank, then became fourth when Riley joined the pack, then third when Puddin’ passed away, and now, second in our pack of two dogs.

Since Tinker passed, Little He has had the family room to himself. We watch TV in there with him, and Riley comes in for closely supervised time. Closely supervised because LH can inadvertently hurt Riley with his awkward play bounces, and almost has. But they long to be together. When the weather’s nice, we all go out to the backyard, or for a walk.

The other day we were out back during a break in the stormy weather. M and I stood in the doorway; Riley and LH cavorted in the fenced yard. Riley disappeared around the corner of the yard.

LH, who had been standing with us, squared his ears and went tearing after him.

A minute later, we heard growling and saw LH using his head to push Riley toward us.

Riley was having none of it. What, me? The alpha dog? Being pushed by this passive hound? Nooo!

We’d never seen this before, so M. went around the corner to check things out. 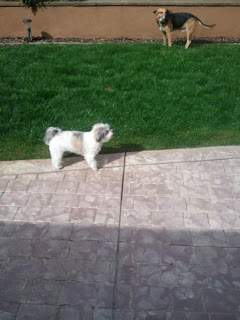 He saw what Little He saw:

The high winds had torn down part of our fence and the yard was exposed to a busy street. Riley could easily have escaped and been hit by a car. But LH pushed him back to safety.

And I stand in awe at the power of dogs. Even beta dogs.