An interconnected web of family – second in a series

Italians in Rochester, NY were identified as either East-side or West-side. We were East-siders, which meant that our families settled somewhere around zip code 14609. That’s where my father’s office was and that’s where the new home we moved into was. (M and his family were mostly, but not entirely, West-siders)

The adjacent East-side zip code of 14621 was where my grandparents and my favorite aunt and uncle lived. To orient yourself, the church from yesterday’s post was on Empire Blvd in 14609. 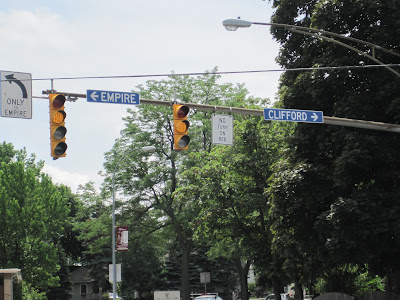 Clifford Avenue was where my grandparents had a tiny apartment (more on that in a minute) not too far away from my favorite aunt and uncle, who lived at 1297 Goodman Street. Yes, the house below. 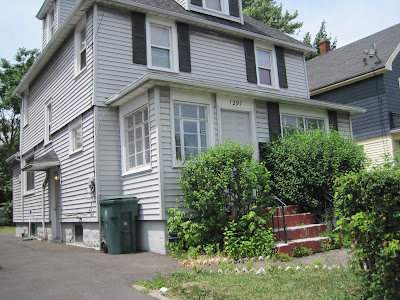 My mother’s youngest brother, Jack, and his wife, Josephine, were the couple my parents spent the most time with. Their four kids were our closest cousins and we often got together. Today they’re called “play dates” but for us it was simply that my mother and aunt felt like getting together for coffee and we went along and got to play with our cousins.

Aunt Jo was a hairdresser. She regularly cut and colored my mother’s hair in her kitchen. We were driven outside by the sharp smell of hair dye, but they smoked cigarettes, drank coffee and talked for hours.

I remember many wonderful Christmases at this house. Many. But things change. By the time I was 17, my aunt and uncle split up and that was the end of our family holidays. There’s more to that story, but it’s not mine to tell. 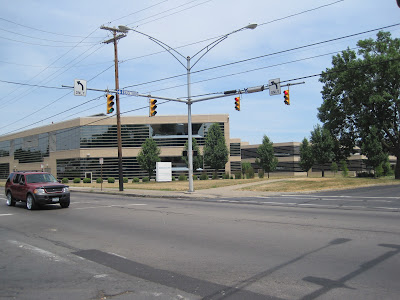 Down the block and across the street was Bond’s Clothing factory, shown above. It’s not Bond’s anymore, though. Although M was a West-sider, two of his aunts and some cousins lived on the East side. In fact, I went to school with four of his cousins who lived near us. And they were patients of my father. But M and I didn’t meet until college.

While I was a little girl walking down Goodman St. with my cousins, M’s Aunt Fran was working as a seamstress just across the street at Bond’s. Who knew? Aunt Fran was the grandmother figure in M’s life and family gatherings were at her house. She never married, but was devoted to her family and her union. Her son invested her small savings wisely in Haloid Corp., which became Xerox, another homegrown company, insuring her a comfortable retirement. 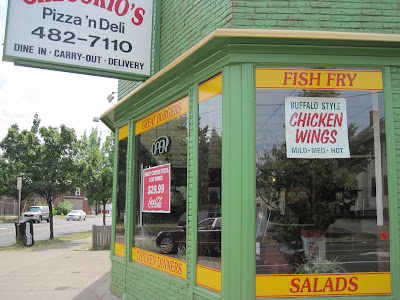 Three doors down from my aunt’s house was this building. It wasn’t a restaurant, though. It was a stuffed toy shop. But actually, it wasn’t that, either. It was a bookie joint. In the back room, behind the stuffed animals on display, men placed bets, played cards and smoked cigars. The numbers racket. It was run by a bookie whose name was “Broadway.” And as it turned out, Broadway lived down the street from our new house (in the typical suburban house below). Yes, everyone and everything in our culture was interconnected. 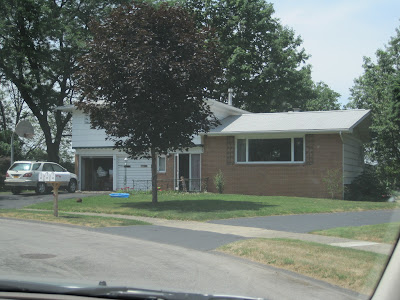 Broadway (we politely called him Mr. C—–) was a nice man and his wife, Yolanda, became like my second mother. As a teenager, I often sat at her kitchen table at the house in the photo above and we’d talk while she cooked or did chores. When she went out, though, she was a va-va-voom kind of woman right out of Central Casting. She had long, wavy red hair, applied dramatic makeup and was fond of stilettos and tight suits with plunging necklines bordered with fur. Take Mob Wives back 50 years (the attire, not the craziness, she was very nice) and you’ll get the picture.

One day I came home from high school to the news that Broadway was missing. His white Lincoln Continental was found abandoned, its gear shift stuck in reverse. He was never found. There were all sorts of rumors that he’d gotten crosswise with the Mob and was executed, his body buried under a new expressway that was being built. All I know for sure, though, is that he was never found.

It sounds strange today to think that a pediatrician and bookie lived a few doors away from each other. But value judgments weren’t made that often; we were all connected by our heritage. Respect was a big thing. It was given and received, but not based on “status.” Such was life in our community. 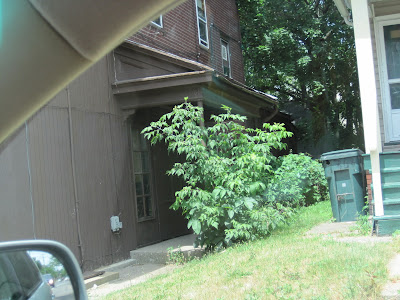 Not too far from my aunt, on Clifford Avenue, lived my maternal grandparents. Up the small stair and on the left was the entrance to a tiny, two-room apartment where they lived. They were my mother’s parents, and we were very close with them. Papa, as we called him, was a kind and gentle spirit. He was born in America and spoke good English. He’d been a printer by trade, but ended up making book for a living. He loved to gamble and we spent many Saturdays at Finger Lakes Racetrack. I was picking Daily Doubles at the age of five.

I remember hearing my mother and grandfather talking about “the joint,” which was where he made book. So one day I asked Papa if he were going to “the joint.”

“It’s not the joint, honey,” he said. “Papa works at the office.” I’ll never forget that.

We all loved Papa dearly; he was a wonderful grandfather. I remember him taking the Greyhound bus to visit me at Syracuse University, wearing a suit and tie. Today that might seem strange, but it was perfectly normal to me. He died at age 78 when I was in my late 20s. I grieved for a very long time.

Mama, our maternal grandmother, practically raised us. She spent most days at our house, holding down the fort while my mother hung out with her friends or did volunteer work. She really was more like a mother to us and always offered unconditional love. (And nagging.) Mama understood more English than she spoke and lived a very sheltered and protected life within the family. Perhaps that’s why she lived so long: she died at age 98.

She’d cook Sunday dinners for us at her little apartment, the radio tuned to The Italian Hour, hosted by Ilio Iachelli. The aroma of red sauce bubbling on the stove, a big dish of pasta, Italian music and the up-down cadence of my parents and grandparents speaking in their Sicilian dialect. Ah, those days are long gone.

Today, movies, documentaries and reality shows sensationalize and even romanticize this kind of life. But we never thought twice about any of it. For us, it was just the way things were. It was normal.

In some ways, I miss that kind of certainty.