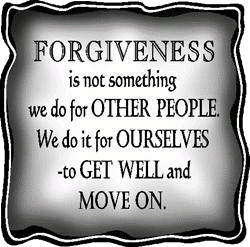 The work I’m “retiring” from often involves dealing with difficult public issues. In that work, it’s been shocking to see how often elected officials lie to the public. They lie for personal gain, for power, for influence, for status. I work most often on the local and state level, and so that’s where I see it the most. But I’m sure it happens in the Congress, too.

The victim is us. Joe Q. Citizen. Backroom deals mean we often pay more for certain services, so that politicos’ and their cronies can benefit. Not just pork. Greed.

I’ve seen this happen so much that I assume it’s embedded in our system of government. Was this what the founding fathers meant by “representative government?”

Then there’s Madoff and his reprehensible behavior. And the Wall St. and corporate honchos raking in gazillions of dollars even as their companies failed. What’s happened to America? or was it always this way? A question for another day.

Which brings me back ’round to “forgiveness.” Forgiveness is something we do for ourselves. It’s supposed to be given without any requirement for restorative justice.

Ok then. So. How DO we forgive someone like Madoff? How do we forgive corporate execs who profited personally even while they were bringing our financial system down?

It’s one thing to forgive someone who’s hurt us personally. A friend, An acquaintance. Someone we know.

It’s another thing to forgive someone for such egregious wrongs as Madoff’s. Or to forgive corporate greed. Or public officials who are supposed to protect public interest.

I don’t know how to even start to do that.