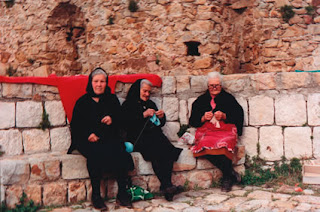 98 year-old villager Maria D’Antuono, from Tempera, near L’Aquila, was dragged from the rubble left by Monday’s devastating earthquake in central Italy. For 30 interminable hours, she lay below the ruins of her house, a few miles from the epicentre.

So what did she do to while away the time, not knowing whether she would live or die as rescue workers dug towards her?

The answer, it seems, was “crochet”.

Before she was taken to hospital, she was asked how she had passed the time since her house had collapsed on her, she reportedly said she had been busy with her hook and wool.

She was given a packet of crackers, but had a request that left onlookers even more astonished than before – and gave an entire new dimension to the concept of bella figura (which roughly translates as “keeping up appearances”).

Before leaving for hospital, she said, she wanted a comb.

I LOVE this story. It’s soo typical of an older Italian woman–I can so picture my grandmother doing this. The photo is of Sicilian women crocheting, not of the rescued nonna.