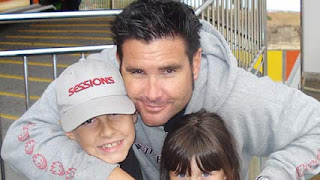 You might not know this story if you don’t live in the Bay area.

At the end of last month, a 42-year old paramedic and father of two from Santa Cruz went to a San Francisco Giants baseball game at Dodger Stadium in Los Angeles. He was brutally attacked in the parking lot. After being kicked repeatedly in the head, Bryan Stow suffered serious brain damage. The prognosis is grim.

While doctors say his chances of survival are slim, he’s been kept in a medically-induced coma since the attack. That’s because every time they try to bring him out of the coma, he has seizures. That’s him, above, with his two young kids. Oh, and he’s a paramedic serving Santa Clara County, where I live.

I’m not a huge sports fan. I love the Giants but I don’t really understand fan craziness. It seems so silly to me. Usually harmless. But not that night.

Here’s how one of Bryan Stow’s companions described the attack to ESPN reporters:

“It was pretty hostile just walking up to the stadium — it was intimidating, to say the least,” he said. “There were a lot of Dodgers fans angry that we were there. We got things thrown at us the whole time we were there — peanuts, hot dogs, wrappers — which we also expected.” But the hostility really escalated after the game. “We were walking out and the mood definitely changed from intimidating to hostile once we got into the parking lot,” Maciel said. “We were actually out there, we were saying great game, shaking some Dodgers fans hands. There were some that were yelling profanities, and just being rowdy. That’s how it started.

“We were honestly just trying to get out of there with our heads down and our tails between our legs because it turned from intimidating to hostile and we were uncomfortable and wanted out of there.”

Maciel said they had an initial encounter with the suspects.

“Bryan and I were walking, side-by-side, and talking, not even about the game, about work, I think,” Maciel said. “Somebody pushed Bryan. This guy came out from behind the car and pushed Bryan into me. I grabbed Bryan and rolled away. We kept walking.

“Then, at that point my older brother Matt intercepted a punch on the cheek that was meant for Bryan, by the same guy that had pushed Bryan.”

Maciel said that even then his group did not respond.

“We all kept walking. We didn’t say anything,” he said. “We just knew we needed to get out of there. We needed to avoid this confrontation. About five minutes later, they came up from behind us, and they caught us when we were all a little bit spread out. I never saw it coming. My other friend Jeff got hit in the mouth and Bryan got hit from behind. He got hit in the side of the head and never saw it coming.

Stow hit his head on the pavement and did not regain consciousness. He remains in a medically induced coma and has had part of his skull removed to take pressure off his brain.

Maciel still can’t understand how a game got so out of hand.

“There’s no need for an innocent person to end up in the hospital over something like this. There’s never any reason to escalate this rivalry to violence, especially tonight.”

Despite the experience, Maciel doesn’t blame Dodgers fans, saying the attackers “were criminals.”

And he doesn’t want further violence.

“We’re not looking for revenge,” Maciel said.. “All that matters is that Bryan gets better and walks out of that hospital.” 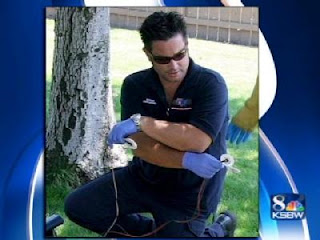 Although there is always hope, chances are slim that Bryan will walk out of that hospital.

So many things disturb me about this. The fact that baseball fans, fans of America’s most wholesome past-time, would throw things at and taunt fans of the opposing team. The fact that we aren’t safe attending a sporting event. Or turning the other cheek.

What has our society degenerated into?

Perhaps this was a case of crazy-drunk fans losing all sense. Or maybe the Giants jersey Stow was wearing was just an excuse for low-lifes to kick the shit out of someone.These attackers are animals.

Police say there are many leads. But it’s been a month; no arrest. And sadly, no progress in Bryan’s condition.

I hope justice is done.

And I pray that this father of young children, this man who has devoted a career to helping save the lives of others, gets the miracle he so surely deserves.