The media tend to overdo coverage when famous people die. But the continuous coverage of Sen. Ted Kennedy’s funeral was important, because it allowed more Americans to know the good man and fine public servant he was, not simply his sins or the caricature.

What we learned was that that he spent his life trying to do the right thing for those less fortunate. That he was a devout man. And at heart, a good man, despite his flaws. Atonement? Maybe. But he came by his liberal heart honestly.

Growing up in a conservative home, I heard my father often use the term “lunatic liberal.”

But watching Sen. Kennedy’s eulogies, my only thought was that this, my conservative friends, is what a liberal life is about. A man who put his money, power and energy where his mouth was.

And Eunice was no slouch in that department, either.

If you’re reading this without having listened to the sharply-written Tracy Chapman song from 20 years ago I posted above, go back and listen to the music and especially the lyrics before reading on: it’s worth it.

As a liberal blessed with good fortune, concern for those less fortunate is at the core of my politics. I’ve paid my share of big taxes over the years, and never once resented it. Never. Taxes are the price we pay for living in a civilized society.

But it wasn’t until I loved someone way more familiar with Chapman’s “sub-city” than I, that I really got hold of how it is for people without luck or privilege — or the ability to bootstrap out.

In years past, it was easy for us to push back the concept of a
City underground
Where people live everyday
Off the waste and decay
Off the discards of their fellow man.

But many of those who were middle class when this song was written are now laid off with lost homes. Some of those are now citizens of sub-city. 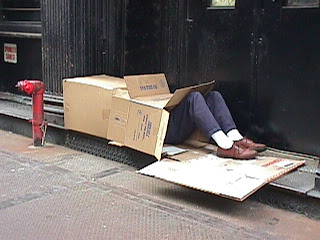 It’s still easy for some of us to forget about them. But we shouldn’t. We can’t. They’re not the stereotyped, unwashed career homeless. They’re not the lazy welfare recipient who wants to live off the fat of the land.

When we talk about handouts and bailouts, it’s easy to forget that people like you and me either benefit or suffer. Not just the fat cats.

When those of us who made better decisions or had better luck count our money, we need to be counting some out to help those less fortunate. Whether it’s taxes or charitable donations or personal gifts.

Because there but for the grace of God go many of us.