When I look around at how my friends’ older parents are coping — or rather NOT coping–with aging, I always think, “Oh, I hope I’m not like that.”

They kick, they scream, they fight. They stay in denial. And we kids? We’re as bad: we don’t know how to talk with them about it. How to honor their losses and still keep them (and others) safe.

I know, because I’ve been through it.

When my grandmother began to leave the stove burners on well into her 80s, it was time for her to move in with my parents. She dug in her heels: she didn’t want to leave her tiny apartment and her independence.

I think my parents underestimated how difficult this was for her, because she’d been a homemaker who spoke no English. Her life was bounded on all sides by her family, so on the surface, it didn’t seem like it should be a big deal. But it was also bounded by her little apartment, her neighborhood, and the dwindling number of other Sicilian woman she could talk with.

On the other hand, she was so forgetful it put her and others at risk. She left her home and moved in with my parents.

My father loved practicing medicine. His tiny patients were critical to his satisfaction with life and he practiced into his 70s. Suddenly, at age 78, he retired. Fact was, he could no longer remember things and he knew it. Realizing he was putting children’s lives on the line, he quit.

It was a hard decision for him. 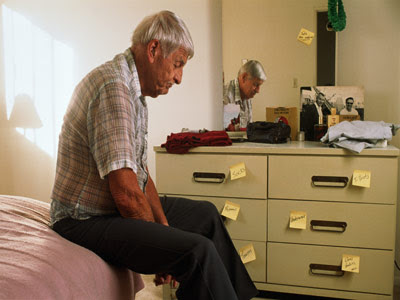 I’m certain that at first he thought it was simply normal aging. No one really wanted to admit there was a larger problem until it grew too large to ignore. Alzheimers. And yes, we found little reminder notes all over the house, just like in the above picture.

Still, we never talked to him directly about it, which I regret. But then, people in my family do not address issues. They ignore them. But silence is rarely an effective solution.

Consequently, no one had the cojones to talk with him about no longer driving. About making alternative plans –like a driver– to help him maintain independence a bit longer. He kept driving.

Even when he went into a memory unit at an assisted living unit, we all maintained the fiction with him that he was in “senior living.” It was dumb and I regret it. We owed him honesty and a safe place to talk about it. Because we found clipped articles about Alzheimers hidden away in his things. He knew. He probably needed to talk about it. We failed him.

Driving resolved itself when he moved into the facility. But he could easily have killed himself and others on the road.

So what do you do when you begin to see the symptoms of parental aging that mean a big change for them?

I don’t pretend to have any understanding of what it’s like to feel life’s limitations for the first time. And I mean serious limitations. The ones that put lives and limbs at risk.

But understanding is a good place to begin. 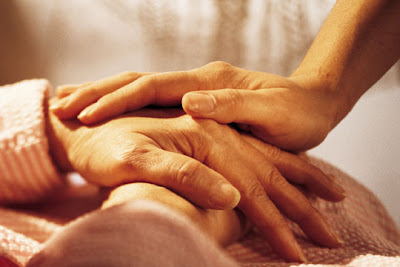 Put yourself in your parent’s shoes. No matter how irritated you might be with your parent’s inability to acknowledge their risk, think about how frightening the loss of freedom and mobility must seem. If you can really grasp what this means to your parent, it’s easier to come from a gentle and caring place when you talk to him or her.

Be direct and honest. I’ve come to believe that no matter how hard it might seem for everyone, we owe our parents the respect of an honest, direct, kind and loving conversation. Avoiding the talk about no longer driving may seem like at least a temporary solution, but in that holding pattern, your mother may hurt or seriously injure herself or others. No matter how childish our elderly parents might act at times, they aren’t children. They’re adults who successfully raised us. Even if they have dementia, it’s only respectful to treat them like the adults they are.

Understand available resources & find creative solutions to help them maintain as much independence as possible. I’ve written before of my regret that we did not do more to keep my father active after he went into a memory unit. We could have hired a student to walk with him every day. We could have engaged a driver and home companion before he went into the facility. My father had resources we could have tapped, but we were new at this and it was hard for some of us to think outside the box. Look for ways not immediately apparent to enrich your parents’ lives.

As my grandmother aged, my mother also aged and found it difficult to deal with some of the more unpleasant effects of a woman who’d begun to fail physically in her late 90s. My mother was not a creative thinker in general; she was not able to embrace options other than putting my grandmother in a nursing home, where she died less than two years later. Our generation, though, has the skills, abilities and often, the resources, to think of and access home care, respite care and other support options. I highly recommend this.

Siblings need to work as partners to support parents. This is so important. I lived thousands of miles away and my mindset was different than my siblings. We didn’t have the skills to use our individual strengths to partner in a way that would have made my father’s life better. It’s important to look beyond those differences. I can’t stress that enough. Wouldn’t you want that for yourself if you were the aging adult?

Visit often and include your aging parent in family events to the extent possible. No question that sometimes it’s hard. But imagine yourself sitting in a facility day in, day out, with little outside interaction. My father’s short-term memory was very short–minutes. But it didn’t mean that he didn’t appreciate having company for short periods of time. In the early stages, he could go out to events but as the dementia got worse, he was uncomfortable leaving his facility. Read the signs, be sensitive to your parent’s cues. They’ll tell you when they’ve reached their limit.

Get the help you, as caregiver, need. If you’re lucky, you have resources to hire caregivers to assist you. If you are the primary caregiver, you’ve got a stressful job. If you have family who will help, take them up on it. Put together a schedule so that you, too, have time to care for yourself. If you have no family or friends who can help, look for programs that provide caregiver respite care. Because trust me, you’ll need it.

The effects of aging don’t mean you can’t have a deep relationship. Even though he suffered from dementia, my father was able to visit me in Florida and California, thanks to my former husband, who traveled with him. (Which meant two round trips in each case. This was definitely out of the box thinking and my ex was so kind to my dad.) I’m not going to say his dementia was easy to handle. We certainly went at it as he tried to take his meds seven or eight times a day (he forgot he’d taken them). Or when he accused us of stealing his Metamucil (we hid it so he wouldn’t take it a dozen times). These are the facts of life with someone suffering from dementia.

But I wouldn’t take $10 million for how those visits enriched his life and mine. The talks we had on walks. The tears we shared at our grief over my mother’s death. His confidences. We got closer than ever. Despite it all, when he said “I wish I could live with you,” well, I wished it, too.

And after he and my ex left to travel back to NY, I looked at the easy chair he’d sat in, now empty, and felt just as empty.

Aging parents are something most of us will deal with, if we’re lucky enough to have our parents long enough. Even if you’re lucky, like one of my friends, to have an aging father, just about completely self-sufficient, although now almost completely blind. {I admire him.} He’s from strong stock, but some day, he, too, will need help.

If you’re approaching middle age, start thinking now about how you will make sure your parents can live their lives as fully and happily as possible, despite any limitations. Because that time will come, sooner than you can imagine.

Do you have any advice? If so, please share in a comment below, rather than on Facebook, so all can benefit from your experiences. Thank you!