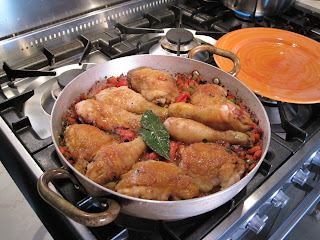 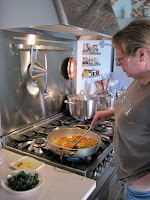 Mama is what we called our maternal grandmother.

So we took a cooking lesson from our hostess this afternoon, another guest and I. In a fabulously equipped kitchen. Here in northwestern Italy. In case you forgot we’re still here.

Can’t remember when I last rolled dough. I think I was in my twenties and it was so traumatic I never did it again. But I did it today. And I’ll do it again at home

Can’t remember when I’ve laughed this much.

We made chicken cacciatore and an unbelievable savory torta with Savoy cabbage. We’ll dine on it tonight. YUM!

I promised I wouldn’t use any of the incredibly unattractive photos we took of the process. But, I can’t resist using my own. No contacts, no makeup. No Photoshop.

We had a brief kitchen discussion about “having work done” and the people we know of who 1) died while having a facelift or 2) look like wax mannequins of themselves. Think Joan Rivers (an Asian wax figure) or Bruce Jenner (who had his work re-done recently but he looks almost as bad.)

And we cooked. And cooked.