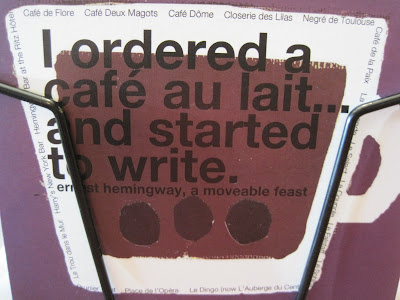 Coffee and writing go back a long way and it’s not surprising.
Something needs to fuel the pen (or keyboard, today)
and the effect of intoxicating substances on writing is unreliable.

Except for maybe Dr. Hunter S. Thompson (may he rest in peace),
Huxley, Burroughs, Kerouac, Kesey and a handful of notable others.

Did you know that Robert Louis Stevenson was a cokehead?
That’s how Jekyll & Hyde got done in less than a week.
Steven King, too, in his heyday.

But for every one of these ___heads (fill in the blank), there are
a score of other writers who are far too addled with substance to
write anything of it.

Coffee, though, that’s another story. It’s always been pretty
cheap, at least until big corporate coffee came along, and
a cup can be sipped and nursed for a long time.

Hemingway, Camus, Sartre and even JK Rowling
wrote in coffee shops. Even Picasso fueled his creativity
with coffee.

I love the taste of coffee, but strangely, rarely get a buzz off of it.
It’s clearly writers’ drug of choice.
And, even without the coffee rush,
mine.