Connect the dots: the 9 dot problem 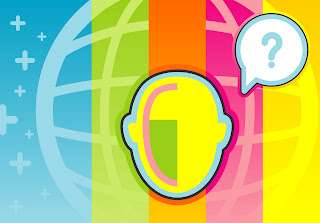 We were lucky enough to see Steve Jobs: The Lost Interview, before its short, limited run ended. Actually, we saw it in Palo Alto, where Steve lived, just down the road a piece from where we live.

The interview was conducted in 1995, the year before Jobs returned to Apple. He was only 40 years old. Handsome, charming, direct and oh-so-bright and visionary.

If you’ve read my other posts about Steve Jobs, you know he was someone I admired and in a strange way his influence was entwined with my time here in Silicon Valley. And so it won’t surprise you to know that I cried at the end for the great loss we’ve experienced.

My husband had no such connection to Steve and found it hard to understand. But as we walked out of the film, he said, “I get it now. He was the Aristotle of our generation–no, he was the DaVinci of our generation. What an amazing mind.”

And then, in the car, he drew this puzzle and talked about how Steve would have solved it. Do you know it?

Draw this with pen and paper. Then, using 4 straight lines, connect all nine dots without lifting your pen off the paper. How about trying to do it with 3 straight lines?

There’s more than one way to solve this problem, and don’t peek till you have tried it. Scroll down for some solutions.

Most people think they have to stay in the box made by the nine dots. But look at the directions closely. I don’t see that rule, do you?

True visionaries don’t see the limits that we mortals see. They go beyond nine-dot puzzles and envision things that never were.

I dream things that never were
and say why not?

Steve Jobs dreamed things that never were and then put teams together and managed them til those impossible things were accomplished.

So what do we learn from people like Jobs, Kennedy and the nine-dot puzzle? It’s not just a puzzle, you know. We can apply that kind of thinking to our own problem-solving–problems of any kind. Here’s how:

Look beyond the definition of the problem. Are there rules? What is allowable and what’s not ? Has the problem been defined any other way besides the obvious? And if it has, immediately test those definitions, because they may not be correct. Define the problem yourself.

Look closely at the boundaries. Are they really there? Or are they self-imposed? One of my favorite Storypeople prints says 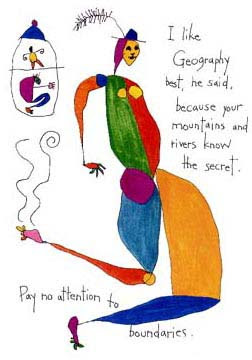 You may see boundaries that aren’t really there–they’re just your perception of limits. What might happen if you push past the boundaries? If you saw no limits?

And then there’s the fallacy of hard work. You can work your ass off doing the wrong thing over and over, harder and harder and you’re still not going to get anywhere. Hard work alone won’t solve this problem, or most others.

I read this recently: “You can be very close to a solution while not getting any closer to it.” I get it. As Steve Jobs knew, thought is the way to a solution. Just working harder isn’t going to get you there.

All of these things apply to just about anything in life, including personal relationships. Family. And work.

Steve Jobs and the 9 dots problem: a lesson for this day and every day.