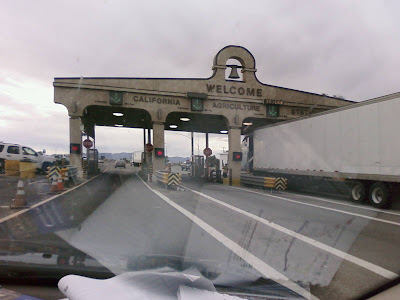 Yes. We made a run for the border and got there tonight. That phot is the ag inspection station, where the agent asked, “What kind of animal are you bringing in?”

And before I could answer, Riley answered, himself. She laughed and waved us through.

Without confiscating our banana.

With 2,400 miles under our belt, we are running about a full day early. We’ll be at our hotel in Sunnyvale tomorrow afternoon, and we get the keys to the house Thursday morning.

But let’s back up.

We left Texas at 6 a.m. and soon thereafter were in New Mexico. Where there was a border stop.

And a dog. Either illegal immigrant-sniffing or drug-sniffing, maybe both.

I had that moment of panic. “Do we have any drugs in the car?” I asked.

Ok, let’s get real. It’s been years, maybe decades, since I’ve had drugs in my car.

Except for the 300 Xanax I scored off my vet for our elderly dog.Which were in my bag. With the Rx. So we were safe.

Since very few illegal immigrants sneak over the border hiding in BMWs, the agent asked a perfunctory “are you all U.S. citizens?” and when we assented, he waved us through.

The desert is always so mysterious. Snow-capped mountains and brush. We made a bathroom stop at a trading post selling southwestern junk. That distinctive southwestern flute music was playing, and always makes me think of red rocks.

Riley needed to stop and stretch his little legs. (and lungs) But he couldn’t figure out how to potty on pebbles, dirt and broken glass. We took his potty pad, laid it out, and presto! He went.

At 1:39pm we saw our first California sign — for San Diego.

M and I began discussing Los Angeles. I’ve always enjoyed myself there and told him so.

“My experience of LA is the traffic–getting up and out. Not a fun thing,” he commented.

Sigh. You can see the problem.

We are in this tiny desert town called Indio. (Which is what Robert Downey, Jr. named his son. Nick Nolte named HIS son, Brawley, after another shitty little desert town. Go figure.)

Pizza Hut will be here soon. Then a hot shower and some pre-bed lounging.