Can you guess what these students are doing?

If you’re in the Baby Boomer generation, you know.

They’re inhaling the aroma of a fresh ditto handout.

Nothing smelled as good or was as evocative of school days as that odor.  It’s been decades since I’ve smelled it, but it remains in my memory bank of smells.

Don’t know what I’m talking about?

Way before Xerox made photocopies ubiquitous and before we could actually print from something called a computer, duplications were achieved by means of something called a “Ditto machine.”  It used “ditto fluid” and sniffing the dittoed tests our teachers gave us was a guilty pleasure. We all did it. Today, sniffing or huffing has horrible connotations, but this was a more innocent time and no one got high or addicted from sniffing their exam papers.  We just liked the smell. Not to say that they wouldn’t get high if they opened a container and really huffed it in, but back then, we didn’t think that way. It wouldn’t occur to us.

And “Ditto” was the name of the best-known U.S. manufacturer. It became a generic term for the duplication machine, which could make only a few hundred copies per original.

They were called Banda machines in the U.K., Roneo in France and Australia. Their generic term was “spirit duplicator” and the “spirit” — an alcohol concoction– was what smelled so good.   I know the illustration in the ad makes the machine look a bit like today’s printers, but really, they were pretty klugey by modern standards and of course, far more manual.

The machine was invented in 1923 and was still in use in the 60s. It was so ubiquitous there’s a scene of kids sniffing their test papers  in Fast Times at Ridgemont HIgh. 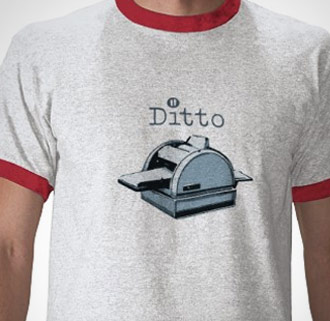 And no, “ditto” as a slang word for “the same” or “me, too” didn’t come from this. It’s an old Roman reference and even in English it goes back to at least 1625. So maybe that’s where the corporation got its name. Back when companies had names with actual meaningful origins.

The problem with ditto copies is that they fade in time, presenting archivists who want to save those fourth grade quizzes with real problems. 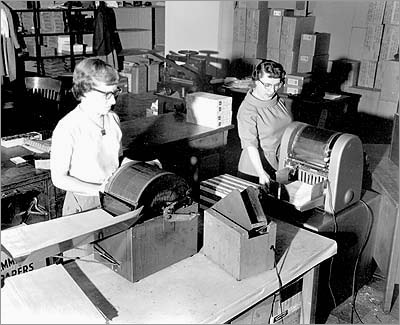 Another small quantity duplicator in the Boomer school days was the mimeograph, which used stencils.  Apparently, Thomas Edison had a patent for part of this technology. The big mimeo company back in the day was A.B. Dick.  Before “dick” became an insult. 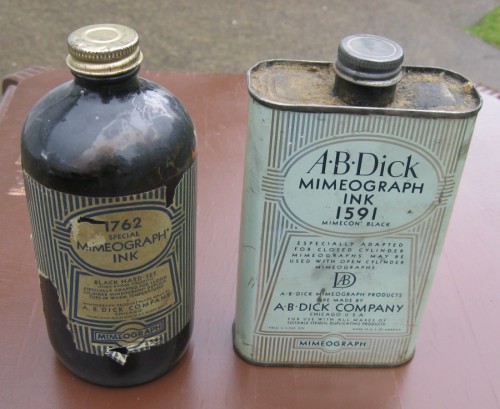 Mimeos have a longer life than dittos, apparently. But still, they could only make a relatively small number of copies.

Kids today — and many adults — have never heard of ditto or mimeograph, which makes me wonder what current technologies will no longer be part of life in 80 years?  For sure, the computer mouse. Maybe the keyboard.

What do you think? and is there anything you remember from childhood that’s now long gone?

21 comments on “Ditto: once high-tech, now a cultural artifact”