Don’t bang on the piñata apples!

Apples everywhere, in the grocery store, an abundance of them, and all sorts. Back when I was growing up, I knew only two types of apples: Delicious and Macintosh. My mother didn’t bake, so I never saw baking apples, and God forbid! A tart, green apple never crossed our threshold.

But I’ve come to enjoy all kinds of apples over the years, so when I saw this particularly large pile of red-striped, orangey fruit and wandered over to see what they were. 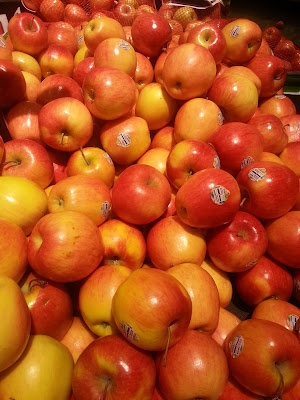 Were they Gala from New Zealand? or sweet, crisp Fujis?  I once knew an apple farmer in Eastern Washington, who sent me a box of the most delicious, mouth-wateringly sweet Fujis, apples unlike anything I’d ever tasted before.

“We send all our best apples to Japan,” he told me. That was back in the late 1990s, but it’s probably still true–we don’t get first quality in the U.S.  Of course, we don’t pay a fortune per apple, either.

Who wouldn’t laugh? Can’t you just picture a bunch of these hanging from the ceiling for people to swat at?

But here’s my gripe: the Safeway apple sign offers no information about the taste. Surely Safeway grocers know that this is a new type apple for most of us, so wouldn’t we want to know what the taste was like? It never occurred to me to just take one, wipe it down and bite into it, but I should have.

Instead, like any good 21st century shopper, I took out my smart phone and went online. Here’s what I learned: It’s what’s called a “boutique apple.”  (Who knew such a thing existed?)

Pinata apples originated when researchers in Germany crossed Golden Delicious, Cox’s Orange Pippin (giving them their vibrant orange-ish color), and  Duchess of Oldenburg varieties.  It was first released in 1986 to be sold commercially in Europe.  Apparently, Stemilt Growers (a sustainable farmer)  in Washington holds the exclusive rights to grow and market in the United States under the name “Pinata.”

They’re a little tiny bit tart, but juicy and crisp, with a little bit of a tropical aftertaste.  Pretty good actually.

But gee, wouldn’t it be nice for Safeway to have given us some information about this new offering? Which leads me to another Safeway gripe: their new produce department design makes it virtually impossible to find anything. There are sections, but no labels for them. Shoppers are clueless about why lettuce is in four different places, or carrots, or just try to find kale. Frustrating.

Back to apples for a moment:

Do you think it’s true that an apple a day keeps the doctor away?

3 comments on “Don’t bang on the piñata apples!”