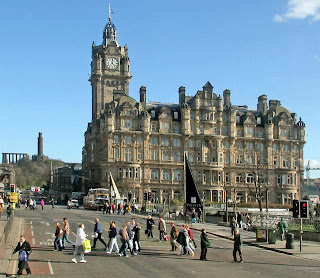 We arrived around 5pm and found our room in the beautiful Balmoral Hotel, which looks like a palace. Since we’ve only just arrived, I don’t have much to say yet. The city is beautiful, chock full of gigantic, historic Georgian buildings badly in need of cleaning. We’re touring the city tomorrow and I can’t wait. 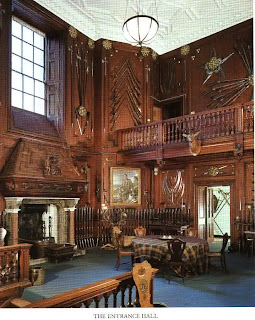 On the way here we stopped at yet another castle (Blair Castle), this one owned by the Duke of Atholl, which sounds like “asshole” with a lisp. The Duke has the only legal private army in Scotland. (Correction: in the WORLD) They’re called the Atholl Highlanders, are largely symbolic and the Duke parades them around the castle annually. That’s the castle entrance with all the “wood.” It’s actually painted plaster.

Oh, you know the colloquial expression “loss of face?” Here’s the origin: Way back when, women’s cosmetics were made of wax. If they sat too close to the fire, their faces could actually melt off and end up in their laps. Or so the guide told us, as explanation for the old needlepoint fireplace screens in the castle. They were meant to protect women from the heat of the fireplace.

We also saw something called a “borde-lou” and that’s phonetic. It’s basically a small China portapotty that women kept in their gown pockets so they could pee in church when ministers preached for too long. Genius, I tell you, genius.

I must admit to penis envy when I have to face some of the rudimentary toilets in Europe. So that contraption really makes sense.

Have you ever heard of a “lean-on cabinet?” They were cleverly constructed so men who had too much to drink could stand straight as they waited for women to invite them into the drawing room after the men’s cocktail and cigar session went on too long.

We have more time to ourselves in the city and we can’t wait to explore.

Three more sleeps and we wing our way west. I’ll be ready.