Every home should have a pinata room 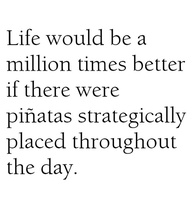 I abhore violent behavior. I don’t like raised voices, things being slammed around, that kind of thing. It brings up really bad memories.

And I do not for one minute think violent games, films or entertainment are good outlets for our frustrations. Do. Not.

Still, I have to admit that there’s something to be said about physically acting out, as long as it isn’t destructive or aimed at a living being.

Sometimes, catharsis is necessary. I don’t know about you, but I’ve been known to pace the house ranting and raving about some frustration or another.  While venting helps, it’s not always enough.

Letting off steam is a physical thing–sometimes  you just have to beat on something.

Wouldn’t it be amazing if these were available to us throughout the day? A way to channel our anger and frustration?

If we had a way to channel frustration, would we be calmer?

And even better, would there be less violence in our society?

So, how to vent frustration?  Perhaps every home should have a Pinata Room and an endless supply of colorful pinatas filled with—well–confetti! Confetti is festive, fun and a shower of confetti would make anyone laugh. And laughter is a great tension reliever.

So it would have to be an easy-to-clean-up Pinata Room.

Note to self: Figure out which room is the Pinata Room.

5 comments on “Every home should have a pinata room”