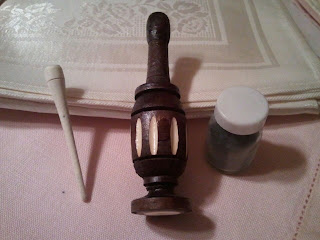 This is kohl, straight from a Berber pharmacy in Morocco.

Yes, I understand there’s an entire generation that thinks Kohl refers to a store.

But those of us who know and love cosmetics know different.

The word, kohl, is Arabic, and refers to eye makeup used by both men and women in ancient Egypt and Africa to darken eyelids — and also as mascara. It was made by grinding galena or lead sulfide and other ingredients and has been in use since 3100 B.C.  And in parts of Asia and Africa, it’s still in use.

The powder is grey in color (like lead) and is supposed to be added to the wooden bottle. Mix a little water in with that small white applicator that resembles a golf tee, and there you have it: ancient eyeliner.

In ancient Egypt, black kohl was used on the upper eyelids, and green –made of malachite– on the lower. The Cleopatra cat eye? Kohl.

Enhancing exotic beauty wasn’t its only purpose: it was also thought to cleanse the eyes, protect the wearer from malevolent spirits and protect the eyes from the bright, hot sun.  {Yes, I know, and once upon a time people thought leeches helped sick people regain their health.}

We saw older Berber women in Morocco with traditional kohl tattoos–a vertical line that ran from their lip to their lower chin.

Of course, kohl is illegal in the U.S. because its heavy metal content is harmful.  Still, as a fan of eyeliner, I had to have some to play with and didn’t realize it was harmful until I got back. Won’t be using it on my eyes, though, and I’m kind of disappointed.