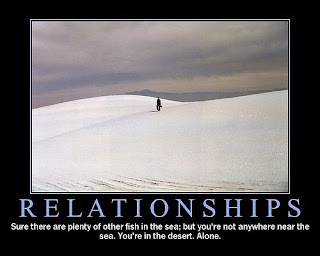 This morning I heard a song lyric that went “Time is just an anchor…” and it got me thinking about relationships and the tradeoffs people make for them.
All relationships start off with the best of intentions. I know several long-term relationships that have run out of steam, where time really is an anchor, and I wonder if a lifetime is just too long for a single relationship. At least for some of us.
There’s the issue of “the kids,” of course, to consider. But once they’re grown, or close to it, then some couples do call “anchors aweigh.”
Many do not. Sometimes it’s because the relationship is generally working well. Or maybe they stick because they don’t want to be in the desert alone. Other times it’s like that saggy section of a mattress you’ve used for years. You know it’s not that good for you, but it’s been there so long, you’re comfortable with it. It’s too much effort to replace it.
As we age and gain experience, we learn that every relationship is a tradeoff. We get certain benefits, but we have to give up some things we might have wanted.
I have two good male friends who date women who have only the physical attributes they like, and not the rest of it. The women they date are constantly taking advantage of them–emotionally and financially– and the relationships never last. I always laugh when they complain about it–they haven’t yet seen that they might find themselves happier and more satisifed if they made different choices. “I can’t meet anyone nice,” they tell me. “Uh huh,” I respond.
I’m all for a hot body, but if there’s nothing upstairs or lots of drama, I’ve had enough experience now to know it ain’t gonna work.
Some tradeoffs are more palatable than others. I thought this morning about what I would’ve had to give up to have the relationship in which the guy wanted us to adopt some biracial kids. I did want to be a mother, strongly, but there were other things that I would not have had. Interactions that would not have been satisfying. So that sacrifice would’ve been too great, even though my pull to motherhood was so strong. Once in a while, good sense prevails.
We only trade off to get what I call “the goodies.” That’s the good stuff in the relationship. I was prepared to make some significant tradeoffs in my last relationship. The “goodies” were really good. But the tradeoff was way too great.
Those of us who find relationships in which we don’t have to give up much at all are lucky.
And if you find one where you don’t have to give up anything, you’re the luckiest person on earth.