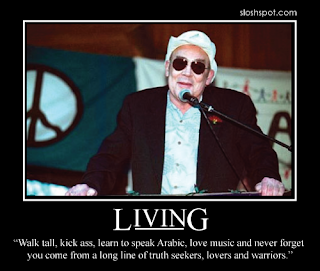 I wonder how many people, like me, think of Dr. Hunter S. Thompson all the time? And feel his loss acutely?

We don’t see this kind of American original that often any more, although if you think about it, he was very in keeping with our nation’s roots.

Ahh, Hunter. Getting old was just too much for you. And yes, you were in danger of becoming a caricature of yourself.

But oh, we miss your incisive and unique turn of a phrase.

I wanted to like her, but I’m a little offended by his widow and her crappy writing. Her books that capitalize on his talent and fame.

She’s carrying the standard, or at least attempting to. But it’s obvious that she really isn’t intellectually up to the task.

I don’t for a minute think they wrote together, as she says they did.

Hunter had a penchant for banging his assistants. He married this one. Maybe he saw something in her that isn’t obvious now that he’s gone. I hope that’s the case.

But she’s just not worthy of him, or carrying on his work, that’s all I’m saying.