Fes: behind the walls 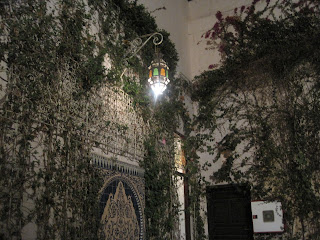 Going behind the veil, behind the walls of a Moroccan city, the face it shows to the outside world is one of the great pleasures of travel. Last night we had dinner with an artist, a dreamer, a man who smashed the conceptions –or misconceptions—the West holds of Islam. 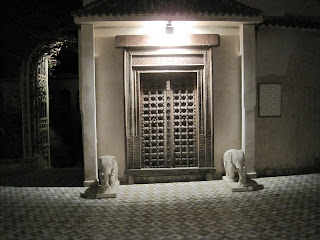 We had dinner at a riad, a huge old estate that is in the long process of being renovated into a luxurious guest house by our host, Fetah. Five rooms are completed with his artist’s touch and they are just beautiful. 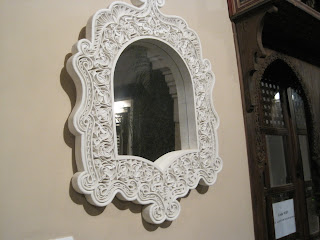 He and his family have lived in Fes since the 14th century, but they are of Iranian descent. They are artisans in the business of making beautiful carved plaster art. The mirror above is an example. 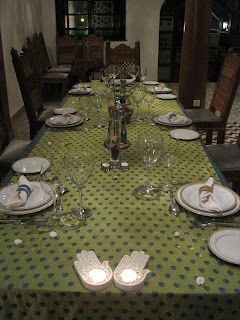 Dinner was traditionally Moroccan, including a tagine of couscous aromatic and spicy with cinnamon and another tagine of tasty chicken. The conversation was lubricated with French wines and traditional music. Our dining room was lit by candles and the lovely ornate metal lamps we’ve seen everywhere in Morocco. Two women in traditional garb and colorful veils danced for our entertainment.

Fetah was unusually open about his culture and he invited us to ask him anything we wanted about his life, religion and culture. We drank wine and dined and talked in a way that casual travelers rarely do.

While he, himself, eschews harems, or so he says, his father had four wives and 17 children. All lived together in a harem, which is really just a huge household of women and children, led by a man.

“Living behind the walls here I have the freedom to be who I really am,” Fetah told us. “Outside the walls, Islam is austere but inside the walls, it is soft and beautiful. Out on the street, I am taken back to the old ways and in my imagination I am back in the 14th century.” 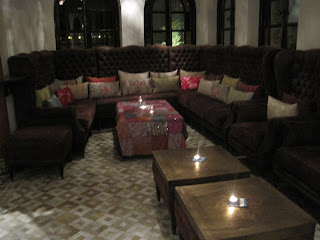 We know so little about Islam, we in America, and this seemed like a great opportunity to ask questions. On the plane I’d read a famous book about Morocco called The Caliph’s House (recommend!) In it, the owner renovated an old estate and was plagued by djinns, or evil spirits that are referred to in the Qu’ran. Or so said the native workmen who came along with the estate. These djinn made the job of fixing up his home really difficult.

I knew Fetah was in renovation mode (although what had been completed belied the fact that he had 17 more rooms to renovate). So I asked if he believed in djinn. After all, it is written in the Qu’ran. “The mind has to step down to spirituality, not religion,” he told us. “Spirituality is very powerful and it requires hard work to look within yourself. Spirituality transcends religion and materialism.

“The Qu’ran is written on many levels, he pointed out, and what you see in it is what you are capable of seeing. The Qu’ran is metaphor and not meant to be taken literally. Simple people back in simple times were not capable of seeing the depth, so stories were told in words and situations they would understand that helped them get the point of the book.”

I was reminded of the Bible, and how I believe it, too, is metaphor, yet there are Christians who believe it must be taken literally.

We’re not so different after all, Christians and Muslims alike. 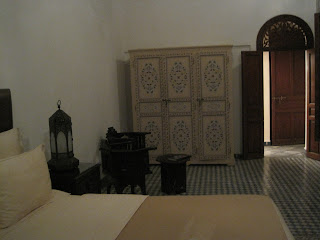 And what about djinns? Had they complicated his renovation?

“I believe djinns are within ourselves, the bad parts of ourselves, not separate entities.” 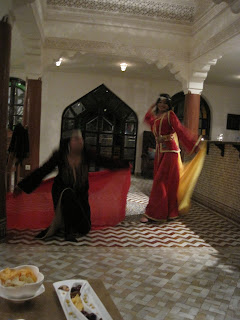 When I finally looked at my watch it was well past 11 p.m. and time for us to make our way to the hotel. Our guide, Mohammed, led us through the dark, narrow alleyways of Fes, now deserted, and back to our vehicle.

I’ve not been a big fan of tours, but this Ambercrombie and Kent experience has been exceptional, so far. There are only five of us and our guide, so it is like having our own private tour behind the high walls of Morocco and is an experience I’ll remember the rest of my life.
By the way, our guide is a Berber who holds a Master’s in English literature. He speaks Berber, Morrocan Arabic, pure Arabic, French and English. Because there are so few of us, his family has invited us to their home for mint tea when we get to the desert later this week.
Oh, and there’s been much discussion about our camel ride. It should be interesting.
Internet is spotty and very slow here and I’ve had to reduce photo size to get them to load more quickly. Click the photos to see them better–some of them are worth a closer look.

2 comments on “Fes: behind the walls”