All for one and one for all. That’s the common view of an Italian family. I’ve seen it in action with friends, both Italian and not.

People assume that all Sicilian families sit around the table eating pasta and having good-natured, dramatic but affectionate arguments. That they are all close, passionate and loving.

My family never connected in any real way and still doesn’t. I’ve thought a lot about why that is and analyzed how parents set the tone for family relationships.

That’s the way it was with one of my Italian-American girlfriend’s family; as a result she and her brother were always close, are approaching 70 and still tight friends. Like her parents, she instilled that in her children, who are also close.

Sure, they have their fights. But the family bond wins out. It’s the way they were raised. Parents established a strong sibling bond and reinforced it over the years.

But our parents went to war shortly after they had me. Establishing a bond between their kids was the last thing on their mind.

In fact, my mother left my father, briefly, when I was just an infant. Imagine the nerve it took for an Italian-American woman to walk out with her babe-in-arms in the early 1950s. 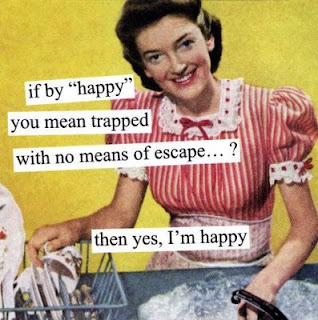 I suspect my mother, no dummy, weighed the pros and cons before deciding to reconcile. She’d thought by marrying a handsome physician from her own culture she’d 1) escape the poverty of her childhood and 2) live happily ever after.

The first part was absolutely true. My father was a good provider and she was able to take care of her parents and her troubled younger brother for the rest of her/their lives.

But my father was not the man she probably thought she was marrying. Difficult, authoritarian, crabby, conservative–he really wasn’t easy. But she made her deal with the devil and she lived with it –miserably– the rest of her too-short life.

As a result, there really was no warm, loving Sicilian upbringing. There were, however, resentment and epic fights.

So Mom escaped the house as much as she could, leaving her three kids to be raised largely by her mother. She’d lunch with friends, shop or just hang out at the beauty salon, then turn up just before dinner. She would cook a basic meal and then sit and silently watch TV with Dad the rest of the night. If they didn’t fight.

I don’t blame her for wanting to run away. Dad really could make her life miserable, and did. Our household was never a safe place; it was always more like a hell for her and for us. It might have been different today, but she was a victim of the situation and the times.

But we were also victims. Our scars were deep and life-changing. So when I had the chance to discuss it with Mom one summer in California, I did, and we both came to terms with what had happened.

As an adult, at least (theoretically) she could choose. Children, on the other hand, can’t choose. They’re tied to the family until they grow up enough to leave. She knew this. But she simply could not act in our best interests.

Under those family circumstances, you’d think we kids would band together for survival. Instead, it was every man for himself. We were on the Titanic, it was sinking and everyone grabbed whatever lifeline they could find, the hell with anyone else.

I was pretty much out there; a rebellious, bossy and sassy eldest kid who turned into a rebellious and sassy adult. I refused to knuckle under and was always being punished. Not much changed as I grew up. But I knew I would leave as soon as I could.

My brother, the middle child, watched the sanctions that were accorded me and kept his mouth shut. His escape was his oral surgery practice. He also watched our parents’ marriage and vowed to never be that kind of husband and father.

My sister took the special privileges bestowed on the “baby” of the family as her due and became a pathologically shy young teen. She never had a career goal and retired after three decades in a government job she didn’t like.

You’d think we’d all be anxious to escape the small, Rust Belt city that was our hometown, but I was the only one who left. But I guess, if you look at my description of each one of us, it’s no surprise that it was me who took off.

I always thought our dysfunction was unusual for our culture and was surprised to find that another girlfriend has a similar scenario in her Italian-American family. So maybe it’s not that out of the ordinary.

As soon as I could, I went off to find a different way of life. With such a dysfunctional family model, it’s no surprise that it took me a long time to find a stable marital situation. I fought against the things that came too naturally: being judgmental, authoritarian, impatient. Those were the things I saw growing up so no surprise that I internalized them.

And I never wanted to be stuck in a marriage like my mother was, so I wasn’t afraid to call it when I wasn’t happy.

As much as he hated the way my father was and swore to be different, my brother turned out to be a more refined version of Dad. But pretty close to the original. He’d deny it, but it’s clear. Focused on being a good provider. Judgmental to the extreme. Big on vendettas, he didn’t speak to my father for years (my father did the same thing to his). He periodically freezes his sisters out, as well (my father did the same with some of his brothers.)

At some point early on, my sister decided I’d had too much support from my parents and she too little. She attributed my modest achievements to my parents’ high expectations of me and told me once that she achieved less because she wasn’t expected to. She resented me: I’d had more advantages, she thought.

Another time she complained because I’d had two husbands and she’d had none. (Yes, I know. A huh??? moment. Honest. It happened. But she’s been happily married for several years now.)

I can still remember an episode 25 years ago that vividly demonstrates how each of us is almost powerless over the family dynamic. It’s a story that may make you uncomfortable. Or sad.

My mother was in surgery, a serious procedure. My father, siblings and I were in the waiting room.

My father asked a hugely inappropriate question and I told him this was not the time or place to discuss it. He repeated it, insisting I answer. I said I wouldn’t.

He’d had hip replacement surgery, but he managed to jump out of his chair and wave his cane at me in a threatening manner. I stood up and challenged him to hit me. Oh, it was quite a scene. We hadn’t had one like that since I was 18.

You’re probably wondering what my siblings were doing while this was happening.

My brother, sitting next to me, buried his head in a dental journal and began humming. Not kidding. That’s what happened.

My sister let out ineffectual protests, at ME.

It’s not that they wanted me to answer the question. They knew it was inappropriate.

But they were certainly not going to step up in solidarity.

They didn’t THINK the Titanic was sinking, but they wanted to keep their options open, just in case.

For a long time, decades, really, I had hoped that buried under all that dysfunction was the kind of family I’d always wanted. I thought I could love my way into it. I kept trying.

I have yet another Italian-American girlfriend (yes, that makes three in this blog entry) whose family left her out of a huge family secret. She felt like an outsider in her family to begin with. Then they all died and the secret came out. She was left to deal with it, and to deal with the reality of just how much of an outsider she was. An awful thing.

Here’s what we all have in common. We blame ourselves. We think, what did I do wrong? What could I have done differently?

It would never occur to us that it isn’t something we did or didn’t do. Or that we couldn’t change it. After all, none of us would ever set out to be purposely mean to others, and especially not to our families.

Recently, I had an almost accidental three-way conversation about this with two people outside my family who have known me very well for more than 40 years. They also had an intimate, outside yet insider view of my family.

They laid out exactly what they saw and explained why I couldn’t change any of it.

“None of this,” they said, “has anything to do with you.” And they told me what it was about. And supported it with other facts and anecdotes.

Holy moley. It made perfect sense.

It was an epiphany.

It’s not about me. I laughed incredulously.

“You are,” my husband said, “going to get a flat head if you keep slapping your hand against it wondering why you didn’t see this before. It was certainly clear to the rest of us.”

But now, with a lighter burden.