Furkins: a step up from vajazzling

Today, though, I bring you another post that’s destined for greatness, a post all about the perfect accessory for a waxed, lasered or shaved pudenda: fur and feather merkins. This product offering is courtesy of former Real Housewife of NYC Cindy Barshop, who invented them and sells them in her waxing salon. Around $200, more or less, depending on the version. What do you think? 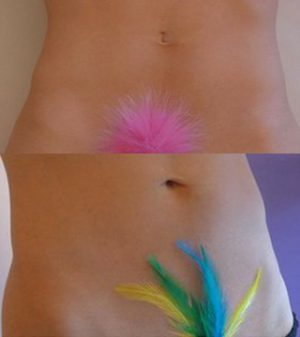 Merkin. Such an obscure word. I have no earthly idea where I first heard it, but I’ve known this word for a damn long time. Never heard it? Look it up HERE.

There’s all sorts of crazy PETA talk out there about these adorable puffs being made out of fox fur. In fact, Gawker’s calling them furkins. (Love it) But they sure look like feathers to me.

I haven’t been able to find a full frontal photo that shows how they are affixed further down below, sorry. But I’d sure like to see the entire design.

Cindy, who also is credited with originating the vajazzle trend, has really hit the right mark with this line of merkins. They’re soft and puffy, so they won’t rip dainty lingerie like fake gemstones, and I think they’re kind of cute. Apparently they can get wet, too. But you’re not supposed to scrub them. This raises a few key questions, but I’ll leave those for now.

And with Mardi Gras coming up, the gay community–always on trend– can’t be far behind. The reason I know this is that in 1990 I went to Mardi Gras for 10 days with 8 gay men. {Our group was so well-connected in the leather community that we got coveted tickets to the Lords of Leather Ball…. where we ran into two friends with their adorable boy-slave. Not a real boy, of course. Oh, so many stories.} Needless to say I came home much better educated on so many things. So, I predict we’ll see furkins in the New Orleans Gay Quarter this Mardi Gras.

Yes, yes, it’s definitely the fall of the empire.

2 comments on “Furkins: a step up from vajazzling”

1 Pings/Trackbacks for "Furkins: a step up from vajazzling"