But there’s only one hometown and for me, it’s Rochester NY.  When I was there in May, my nephew and I went to lunch at Schoen Place, along the river. Although the water looks muddy, the view was nice and the conversation was stellar. 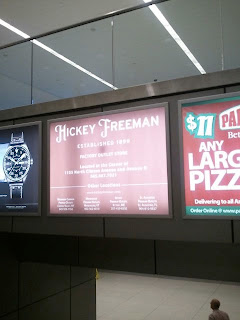 At the airport, this sign greeted us. It has special meaning. M’s paternal grandmother’s “friend”, Frank, worked at men’s clothing manufacturer Hickey Freeman in Rochester.

Frank was a mysterious figure who lived with M’s family upstairs in the room next to his grandmother, who was an invalid. Did no one think it was strange that Grandma’s male friend lived in the bedroom next door? In the 1960s?

And then Grandpa was…infamous. Family lore is that he was a Mafia hit man and died in a Florida prison. (Remember: we’re Sicilian.) 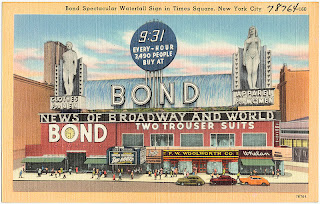 Hickey Freeman wasn’t the only manufacturer in town. Clothing manufacturers were big back in the day, capitalizing on Rochester’s immigrant labor who did “piece work.” M’s maternal family matriarch, Aunt Fran, worked at Bonds and had the thick glasses to prove her hours of stitching. My own aunt lived across the street from the factory so Bonds was part of my life growing up, too. It was a big deal back in the day, but closed in 1977.

I left Rochester for good in 1972, but before I did, I spent a bit of time in the city’s dark and paneled pubs. The drinking age was 18 but at 16, I made myself a fake ID so good I started making them for my friends. That was before driver’s licenses were plastic. It was easy to modify old-style “computer print” on paper, then run over it a few times with the car to dirty it up.

Brought back memories when M. and I had dinner with his cousins at this newer pub, the Tap & Mallet, in May. 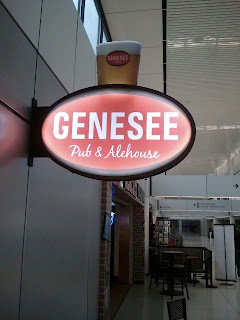 Right off the airplane, we saw this unmistakable sign that we were in our hometown. In the airport. Genny Cream Ale was M’s drink of choice in his youth.

Surprise! I’ll see this sign again today as I am on my way back to Rochester, alone, for the week. I’m sitting down with my last surviving uncle to talk about my father’s family. When I saw him two months ago, I learned that the family life my father described wasn’t exactly the way it happened. I’m going back to learn more from him and to research property records. And the same with my last surviving aunt.

I think there’s a story there.

Staying with my fabulous, fun sister-in-love and hanging out with her when I’m not researching. And my schedule’s chock-full: in between interviews, seeing my smart, interesting nephew and his friend and mine, Joe; dinner with my cousin and his wife; reconnecting with a close friend from high school…. and of course, there’s Henry, the Wonder Dog.

Here are words I’ve never said before:  I LOVE Rochester!  More on how this 180 degree shift happened another time.