Going home – first in a series

I’ve lived away for my entire adult life, so I don’t know what it’s like to live as a grown-up around immediate and extended family. In some ways it’s made me the odd person out with my siblings, who both stayed. While I’m not sure my hometown could have held me, nostalgia remains for that simpler life and the things I knew as a child, especially now that time has passed and many things have changed.

At a certain age, we start to look back at where we started and where we’ve been. How did we start? What nurtured and formed us? And of course, we ask “what did it all mean?”

This is where it began for me, a building in Rochester, NY that my father and his father built with their own hands. My paternal grandfather, Delfio, was a brickmason, strong as an ox, but he never learned to read or write. He came to America from Sicily to make a better life for his family. 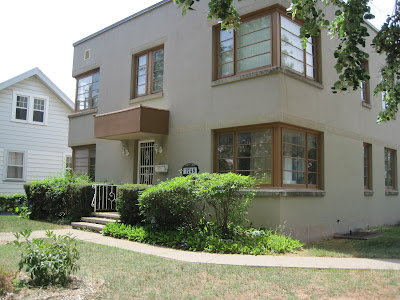 My father was just out of medical school when they built this to house his new medical practice and the family he planned to have. I respect many things about my father, but most of all that he was self-made. He worked his way through medical school by working on high scaffolds, he built his own office and he never shied away from hard work. That’s what he modeled for his kids and we were all lucky enough to have developed his work ethic. (Unfortunately, but inevitably, we also developed a few of his less positive traits, but that is another discussion)

Above, you’re looking at the entrance to his pediatric office, which was on the first floor. Three examining rooms, a lab, a private office, two small bathrooms and a waiting room. He began to practice medicine in 1948 and didn’t stop until it was clear that he could no longer remember things. He was 78 years old. He didn’t suffer fools gladly, but his patients loved him and he loved pediatrics. 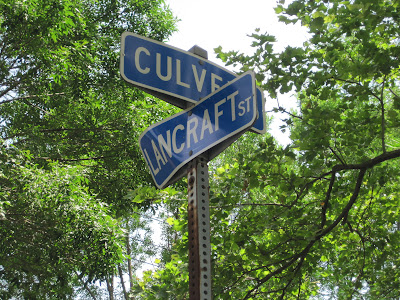 The office address was on Culver Road, but the two-bedroom apartment above it was on Lancraft Street. My father knew a corner lot was desirable, especially in a pretty area and on a main street like Culver. 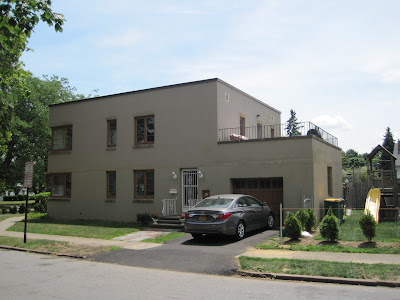 The apartment entrance was on the Lancraft side and that deck above the garage is just off the kitchen. This was the home to which my father brought his new bride. He and my mother met when she accompanied a girlfriend who was making drapes for my father’s new apartment. My mother, a pretty redhead also of Sicilian descent, caught his eye. Did I mention she had the same work ethic? That’s right. After high school, she worked three jobs to support her illiterate parents and even bought them a house.

My parents had a difficult marriage, and as a child I often wished they’d divorce. I couldn’t see that it was an unbreakable bond and that he’d be despondent when she died in 1999. The next year, he and I went for a walk and talked about life. “I married the woman I wanted, had the career I wanted and I had the life I wanted,” he told me. I smiled to myself, looked up to the heavens and said, “Hear that, Mom?” Marriage is complicated, isn’t it?

We three kids arrived at 55 Lancraft Street as newborns and lived there until I was 6, when my parents built a home a few miles away. 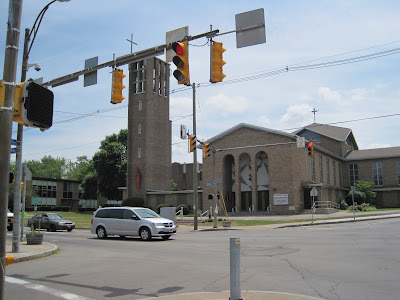 Both of my parents’ funerals were held here. My father died in 2008. He was almost 90 years old and had spent his last nine years in an Alzheimer’s facility. It was an ironic and heartbreaking end for a man who’d made his living with his very good brain.

I eulogized both of my parents at their funerals here. Many of my father’s patients attended his funeral and I’ll never forget how the church broke into spontaneous applause after my eulogy; not for me, but for my father. 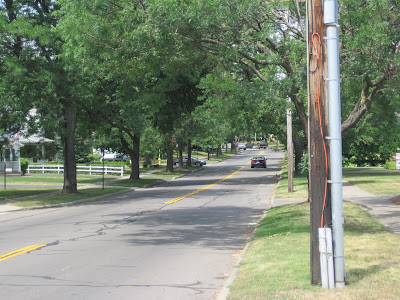 This is Culver Rd, between my father’s office and the church. Just a little ways down, my father’s funeral procession slowed, then stopped briefly in front of his office, in a touching, respectful tribute that the funeral home owner, a family friend, surprised us with.

There were other institutions in the neighborhood, as well.

This was THE place to go on Sunday. It was also between the church and the office — dangerously close— and it had the best donuts in town. Still does. M and I stopped in last month when we were visiting. 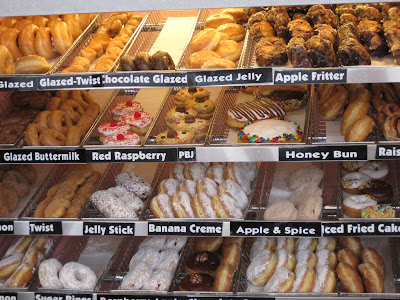 Mmm. I can still remember the taste of every one. Over the years, most of us in that part of town tried all of these varieties. We knew no other donuts; Dunkin never passed our lips. We may not have always attended Mass, but we were the faithful as far as Donuts Delite went.

The original Donuts Delite had a pink and blue counter below this sign. It wasn’t unusual to stop in for a dozen donuts and find my Uncle Joe sitting there with a thick white mug of coffee talking with a few of his cronies. “Hi, honey,” he’d call out in his husky voice, turning in his chair so we could kiss him hello. Men and women kissed one another hello in our family; it’s just that way in traditional Italian families. 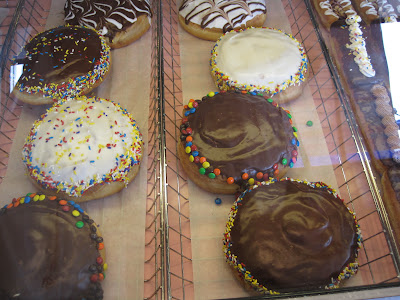 THESE are the best donuts in the world. They are called “flying saucers,” probably in a nod to the space program in the 1960s. Oh-oh-oh–nothing better. Most of us would give up sex for these. (And if we kept eating them, we’d have to.)

Donuts Delite closed for a few years couple years ago, and then reopened with a new owner. BUT a member of the original family is making the donuts and they taste just the same.

We spent less than an hour in this part of my hometown last month, but it brought back many memories of a more innocent time and a place. And so many questions that I wish I had asked when my parents were still here to answer them. We think we’ll always have our parents, and then, one day, they’re gone. But our questions remain.

And so does our love for them.

2 comments on “Going home – first in a series”