Gone, but not forgotten – third in a series

The West side of Rochester, where M is from, is dominated by one thing: Eastman Kodak. 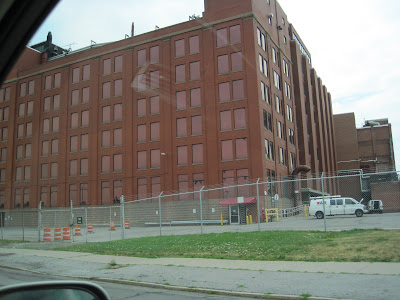 At its height, Kodak directly employed 60,000 Rochesterians. In a city of only 350,000 that made it the top employer and the big cheese in town. Kodak was THE place to work, because of its “benefits and security,” two important factors to an immigrant population. An entire town sprang up as a bedroom community. (Greece, NY) Schools were built. Sales were timed around the week Kodak’s annual employee bonuses came out.

Today, though, with a mere 7,400 employees in Rochester it’s not even in the top two employers. Rochester is a Rust Belt city and has been on the decline for a long time. Clifford Avenue and Goodman Street, pictured in yesterday’s blog post, are virtually slums today. And so is Portland Avenue, below. And inevitably, the decline is creeping into the suburbs. That’s the way it is with urban decline: like a row of dominoes, but not as fast. 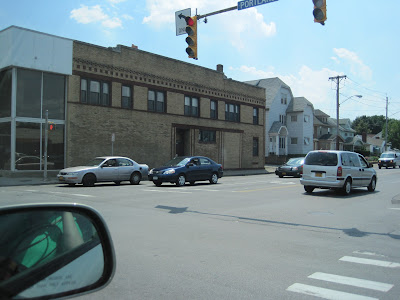 This building–located quite close to Rochester General Hospital– used to house Mandell’s Drug Store. Hy Mandell, the owner and pharmacist, extended my father credit and support when he was just getting started in his medical practice. With chain drugstores like CVS and Walgreens on every corner, it’s hard to imagine a world in which doctors knew local pharmacists–and their children– by name. My father was loyal until the day Mandell’s went out of business. (Loyalty was another thing my father taught us by example.)

The hospital has expanded; I know it well. It was where my mother lived most of the last year of her life and I saw it again last month -bigger and renovated– when I visited Miss Webster. But after Hy passed away so did the drugstore. In the years since, independent druggists have had a hard road. When I looked at the building’s bricked over windows and considered the anonymous pharmacists who fill my prescriptions, I thought about how much we have lost even as we have made “progress.” 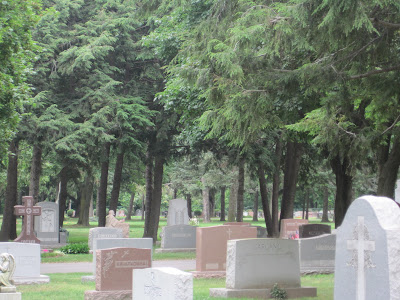 Another mainstay of the West side is Holy Sepulchre, the big Catholic cemetery. It’s a bit ironic that cemeteries are usually some of the most beautiful properties in a town, with gorgeous landscaping, mature trees and bucolic settings.

While I know that our loved ones aren’t “there,” I still couldn’t resist the urge to visit Holy Sepulchre with M. 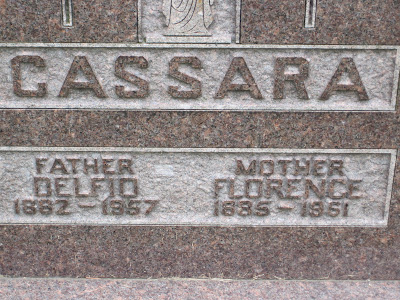 I remember them, but I didn’t know my paternal grandparents well at all. They spoke no English and they died when I was quite young–in 1957 and 1961. As kids, we’d visit our grandmother in a nursing home every week; I can still remember that. But the only way they really lived for us was in the stories my father would tell about his hardscrabble childhood. 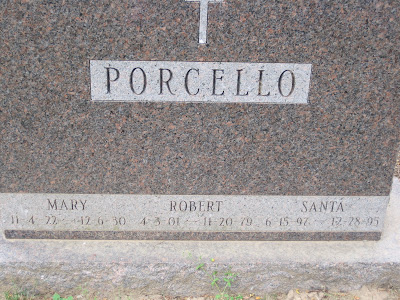 Our maternal grandaparents, Mama (yes, her name was Santa) and Papa (did I tell you his bookie name was Buffalo Bob?) had a daughter, Mary, who died as a child. She got ill with meningitis, I think, before antibiotics. Many parents lost children in that era and bore it stoically, but it was still a heartbreak. Until the day she died, Mama had a large framed photo of Mary in her room. I never knew what happened to the picture, but I’d love to have it now. Mary was actually buried in Elmira, NY, where my mother grew up. But my mother had her body exhumed and moved to this plot.

Uncle Jack was our favorite uncle. He was the only adult who ever engaged with us kids. Before he and Aunt Josephine split up he’d often pile all of us kids into his car and take us “for a ride,” which usually meant the New York State Thruway. It was such a treat! 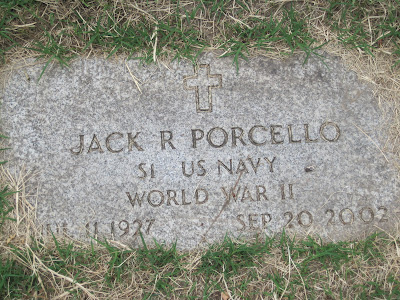 Jack was my mother’s youngest brother. She was devoted to him and when he fell on hard times she was the mainstay of his support. Today, we’d call it co-dependent and it was. But he was clearly the most important of any of our uncles and aunts and we loved him dearly.

I was working in Tampa when I got an email that Uncle Jack had died unexpectedly. An EMAIL. It was a thoughtless way to tell me about the death of a beloved Uncle. When you move away, as I did, folks back in the hometown often think you’re not as attached. Nothing could be further from the truth. I read the email, then sat at my desk in shock. When I tried to work, I found myself completely unable. I left the office and spent the rest of the day grieving at home. 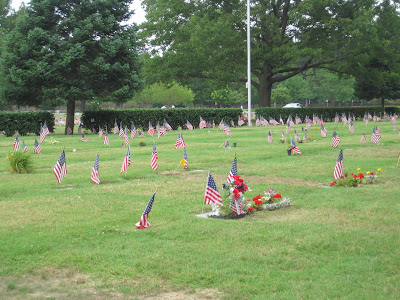 M and I spent at least half an hour in the humid overcast trying to find his gravestone last month, walking here, looking at the map, walking there. I wasn’t about to leave without finding it and was relieved when we did so I could pay my respects. He was a veteran, and that’s the part of Holy Sepulchre in which he’s buried.

My mother didn’t want to be in the ground. So she and my father are at eternal rest in a mausoleum. (Well, their bodies are.) When we laid my mother to rest, my father’s name had already been engraved on the stone, with date of death left blank. I asked him if it felt weird to see his name there. He said it didn’t, but it sure would’ve given ME pause. In 2008, that date was finally engraved. 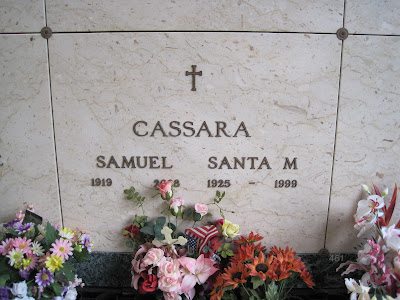 I didn’t feel their presence but I did spend some time thanking them and getting lost in memories. And the M in her name was for “Maria”: Santa Maria. My Aunt Jo used to call her Santa Maria Nina Pinto — a reference to Christopher Columbus’ ships. (She rarely used her middle name–Aida–and you can see why. Yes, after my grandfather’s favorite opera.)

Of course, my in-laws weren’t too far away in another section of the cemetery. I’d visited their graves before (yes, after M and I divorced) but M. hadn’t returned to the cemetery after their funerals. It took some convincing to get him there.

First, you have to know that in our heritage, we call our inlaws “Mom” and “Dad.” No, it wasn’t at all confusing. Just the way it was. While M and I were engaged in Rochester, we spent every Sunday with his large extended family and quite a bit of time with his parents. Famiglia. 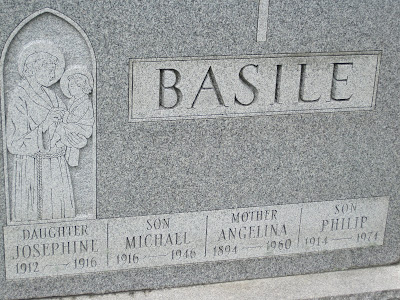 My father-in-law, Philip, was a taciturn man, very smart and so handsome. M. looks like him but his brother looks even more like him. By the time I met Dad in 1970 he was partially paralyzed and had a significant speech impairment from several strokes and heart attacks. He died in M’s and my second year of marriage and I was always sorry that I’d never known the vibrant man he must have been.

You might notice there is no wife on the stone above. Angelina, Philip’s mother and M’s grandmother, apparently was quite the bitch. She made no provision for her daughter-in-law to be buried with Philip. It was pretty mean. However, my mother in law, Betty, nudged her way into the plot, and rightfully so. 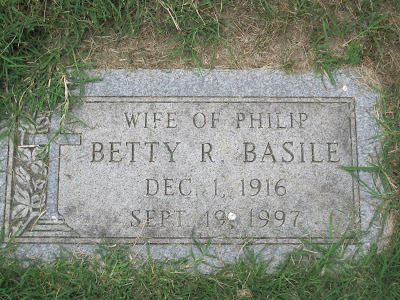 I hated to see the stone was separate from Phil’s.

Betty’s name really wasn’t Betty. It was Blaise, patron saint of throat ailments, which she had as a baby. But Betty was what got recorded back then. My sister-in-law reminds me of Mom Basile –kinetic, talkative, athletic. Impeccably groomed. She had been a career woman until she had her children and M surmises that she really never wanted a family. But she had two sons and two grandchildren.

She was still alive when M and I divorced, so it was kind of fun to show up at the gravesite with her son. “So, I’m back,” I told her. M and I laughed.

Here’s the honest truth: Sicilians adopt their inlaws. Divorce wasn’t part of the culture for our parents, so when it happened with their kids they weren’t sure how to deal with it. After M. left my mother-in-law and I never spoke again. I understand that she must not have known how to deal with it–there were no cultural rules for this situation. Still, it cut me to the bone. I’d called her “Mom” and then, like the severing of a limb, she was gone in an instant.

My life has taught me many things, and this was a biggie: One thing has nothing to do with the other. You may remember that I remain friends with my sister-in-law, although she’s now divorced from my brother –and that’s why. I can’t imagine it any other way. Our friendship has nothing to do with their divorce. We don’t talk about my brother or their relationship, either. We talk about our lives now, our work, her son, dating. We’ve known each other a very long time, but truthfully, we have more in common now than we ever have and I like to think I’ve been a little helpful to her as she navigated a difficult divorce. It’s a friendship and one I treasure. One thing has nothing to do with the other.

I do think about what it would have been like to live in my hometown. But I think I have the better deal. The Rochester of my childhood lives in my memory. I can remember it fondly, fantasize about it and visit.

I don’t have to deal with the realities of today: small-town gossip, family feuds and –the dealbreaker for M — snow.

Yes, I’m happy with my choice.

5 comments on “Gone, but not forgotten – third in a series”