Good to be home

Home again and happy to be here, after a great trip. More on the trip later.

When I think about the blessings of this coast-to-coast life, the one that stands out most is to have the luxury of staying connected with dear ones on both sides of the country.

One thing that wasn’t a blessing was that our flight back to DFW was cancelled, just like our incoming flight was. What are the chances of that? Last week it was weather in Dallas, this week it was that our aircraft was hit by lightning on its prior flight and failed its inspection. 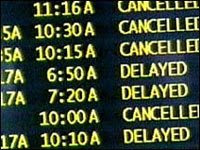 That meant a departure delay of three long hours, as they routed us through Chicago….a longer route and another one that didn’t get us to Tampa till 1a.m.. They got us our First Class tickets, but just like on the front end, they weren’t together and we had to negotiate with fellow travelers to be seated adjacent. The freshly-baked chocolate chip cookies were consolation, though. (They thought the fact that we were flying on a brand new 737 was a consolation. But no. It was the cookies.)

I have flown First many times, and Coach many more, and what stands out to me is that the flight attendants in First are always so courteous and kind. But if you’re flying in Coach, it’s a whole different story. I’m not sure why that has to be.

We saw a TV news story yesterday morning about three little chihauhaus that were confronted by a mountain lion in their garage and intimidated it so much he didn’t eat them. I’d like to think that’s how our dogs would be, but I am definitely concerned that we protect them from coyotes and mountain lions that are coming down the hills, probably for water. We don’t want our babies turned into tasty treats!

Even though we arrived so late that I couldn’t get to sleep, I was at the kennel when it opened at 7:30a.m. to get Riley. Who was so excited to be home!! Cute cute cute!

We have a long stretch now till FLH arrives in about a month, and he’s probably driving and bringing his chow-chow, Puddin, with him. We’re very excited to introduce Riley and Puddin’, and to see how that works. We think Riley will love having his own pack, and trust us, it will be HIS pack.

That’s it for now. I have to take FLH to the airport at noon for his flight home to Miami.