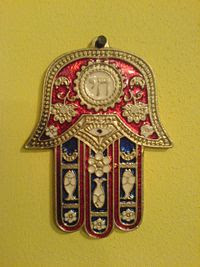 We Italians have all sorts of amulets and hand signals to warn off the evil eye. It’s also true in North Africa, where the hamsa (or the hand of Fatima) does the same thing.
The palm-shaped amulet is apparently quite often found in jewelry, wall hangings and even votive candleholders, stylized in many different ways.
Here’s where it gets a little confusing. It’s actually got several names. The Hand of Fatima is the name that references Muhammad’s daughter, Fatima Zahara. But it’s also called the hand of Mary by Levantine Christians. Believe it or not, it was also incorporated into Jewish tradition and was renamed—wait for it—the hand of Miriam, for the sister of Moses.
No matter what it’s called, it protects the wearer or owner from the evil eye. And that’s something we can all use, no?