Cats are easier, and that’s what I’d had, for 23 years. My lifestyle just didn’t permit me to have a dog.I never dreamed that I could grow so close to a dog that I’d become a neurotic, maternal mess.

But, then I met –and fell in love with — a very special little maltipoo from Seattle. He was a tiny thing when I got him, just two and a half pounds. I was terrified, that first night. “What have I done?” I asked myself.

That was the last time I ever questioned my decision to bring this little guy into my life. 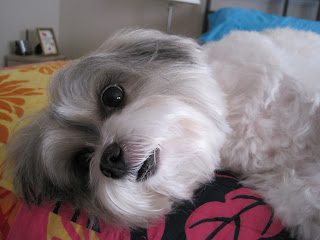 It wasn’t long before I realized what a special little creature I had. A maltipoo is a cross between a Maltese and a toy poodle. Very, very smart. If there was a doggie Mensa, Riley would be a member. 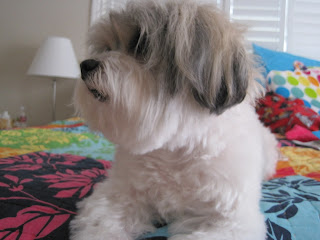 Riley is a dog of many moods. Many looks. And many talents. 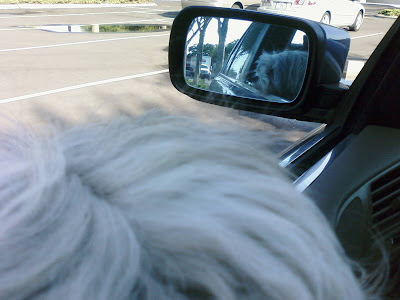 Riley and I have been together long enough now to be able to look in the rear-view mirror. Many, many memories of good times in Tampa, Pacific Grove, Boulder, Sunnyvale and San Jose. And at least 10 plane trips! 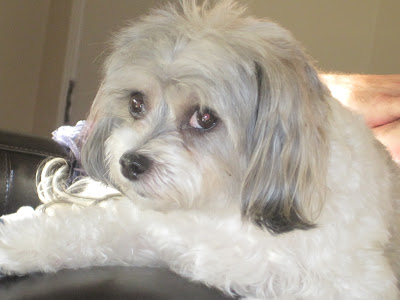 Riley is often the Dennis the Menace of dogs, mischievous and willful, but he can also be soft and cuddly. If there was a gang of dogs who robbed banks, Riley would be the ringleader. But with a heart of gold. 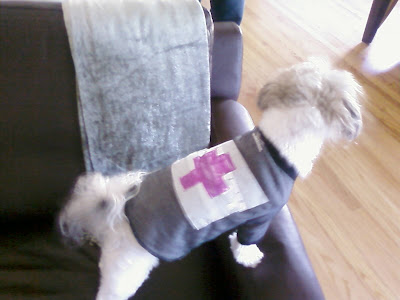 My little “perromedic,” ready and waiting to assist when I came home injured last year. He’s a smart little dog! If only medical school didn’t take so long… 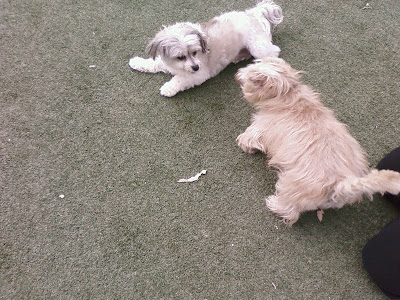 Riley and his favorite playmate, Lexi. Fortunately, she knows how to put him in his place, which she does when he gets a little rough with his “love bites.” 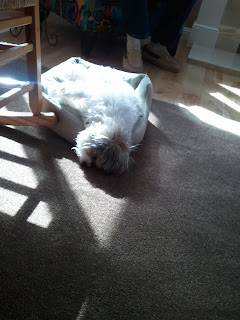 This is one of his favorite sleeping positions. (Don’t ask, I have no idea; the bed is more than big enough for him. Maybe it’s a doggie yoga position.) 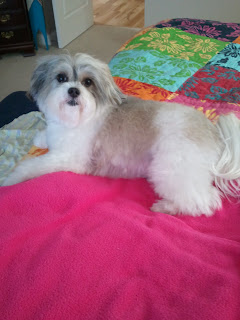 “What? You think that’s weird? Maybe you’ll feel better to know I also sleep on this king bed.” 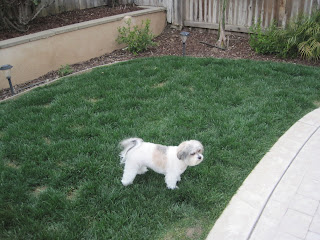 So much excitement now that he has his own back yard! He loves rolling in the mud and having pee-offs with his big brother. This photo was taken yesterday, just after his grooming at Barbara’s Snip n’ Clip. Because I knew that he’d be rolling in dead worms before long. 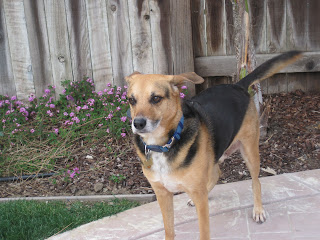 Meet Riley’s big brother, “Little He.” He’s a 12 year-old hound (yes, he does look youthful) and boy, does he let out a howl when he misses his brother! They’re great chums, even though Riley is only 10 lbs and Little He is 40 lbs. 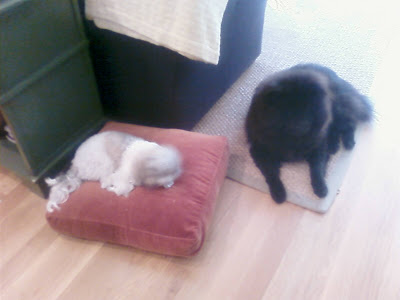 This photo makes me cry. It’s of Riley and the late Puddin’, the only dog who out-alpha-ed Riley. The two of them were adorable together. Puddin’ was only six years old when she died suddenly of an undetected heart ailment. We thought they’d be the last two dogs standing, but that’s not how it turned out. Chows are aloof, and she was, but she was also the sweetest girl of all, protective of Riley and me both. I can still see her presiding over our pack with her regal bearing. I didn’t know her very long, but fell in love instantly. Puddin’, we miss you every day. Especially Riley, who needed her guidance. 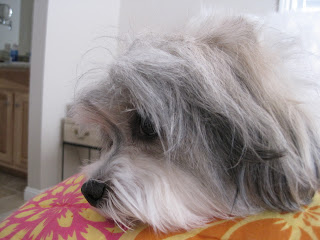 Every day with our beloved dog companions is a blessing. If we’re lucky, we have 15 years or more, like M. had with Tinker, who passed away last month.

Someone once told me “You may not get the dog you expect, but you always get the dog you need.” I think that’s true. Riley’s been just the ticket and I want a long time with him. 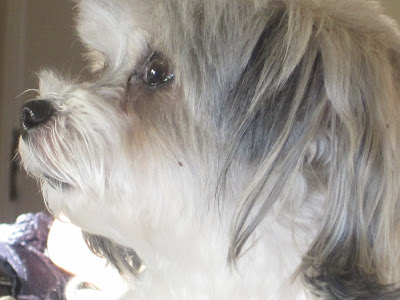 Happy fourth birthday, little man. You couldn’t be loved any more than you are. May we have many more years together.