She was a girly-girl who had sex and made no bones about it, a career woman who thought getting and keeping a man were the best things a woman could do. She was all about glamour, sex, staying thin as a rail, and writing racy copy for Cosmopolitan, the magazine that she was almost synonymous with. Women could have it all–sex, money, love, and maintain their femininity.

Agree with her or not, she was, in fact, a cultural icon for Boomers and the half generation before us and a true American original.

We all aspired to be Cosmo girls, back in the late 1960s and early 1970s, before the feminist movement took hold in popular culture and attempted to change how we women viewed ourselves. Helen straddled the cusp of an evolving female identity, and while her girlishness seems anachronistic today, she really was the first one to talk about sex openly, as if  it were just another part of life. It was even in the title of her best-selling book: Sex and the Single Girl, long before Carrie Bradshaw, her stilettos and her big city career woman persona appeared on the scene.

Helen came to Cosmo in the early 1960s with orders to turn the magazine around, and so she did, staying there some 32 years. When she died, she still held the title of International Editor, although I read once that really, it was more a nod to her emeritus status than anything else. 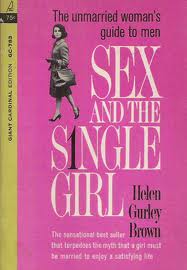 Her career accomplishments? A best selling author, a successful magazine editor, a loving wife. She and her husband, David Brown, established the Brown Institute for Media Technology at both Columbia School of Journalism and Stanford’s Engineering School. That $30 million is intended to develop journalism in the context of new technologies.  Surprised? I was.

So in the end, she left an indelible mark on our culture and going forward, will continue to leave her mark on new media.

She lived 90 years–she was just a few years younger than my father, for God’s sake, already past her 20s when I was born.Yet, I feel as if she’d been a part of my young womanhood and that her passing is upsetting beyond reason,  another sign that we are all mortal and are running out of time to leave our mark on the world.

Thanks, Helen, for yours. I’d say “rest in peace,” but I think you’ll be grabbing a lipstick, your briefcase and some lacy lingerie and heading on to the next challenge. Godspeed to you.

Got any memories of Helen and her impact on your life? Love to hear them, below.