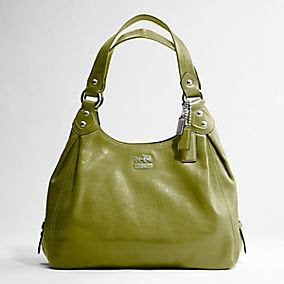 I did some retail therapy yesterday, the first time in some months.

It’s not like I needed it, but I spied this gorgeous confection the moment I walked into the Coach store. And after scouring all the other stores in the mall for something I liked better or as well that cost less, I went back and bought it.

It’s loaded up and waiting for its maiden outing today.

Coach bags have always defined classic for me and I have a closet shelf full of them, going back 30 years. Mostly black bags and one medium brown. This is my first Coach bag of color. 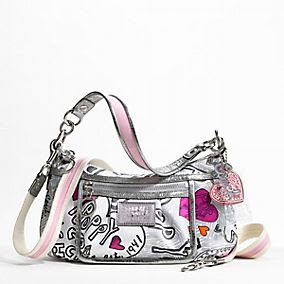 You may remember how dismayed I was about the direction Coach design was taking–metallics and bursts of color in prints that looked almost Ed Hardy-ish. You know, that youthful brand Jon Gosselin was paid to wear? Horryifying.

But the nice young nursing student who was my sales clerk cleared up what the newer Coach designs are about. They are about tourists. 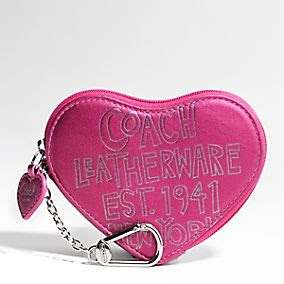 The store is divided in two. Half offers the classic bags, like the one I bought. Gorgeous designs. Pops of color.

The other half offers that awful metallic and graffiti crap and it’s aimed directly at tourists from Japan and elsewhere. See bottom two examples.

The clerk told me that busloads of Japanese women are transported by bus to the San Francisco store, right off the plane, to shop, and then taken back to the plane to go back. She says the metallic line sells like hotcakes to them.

The classic bags do modestly well.

A side note: This so reminds me of how Tampa’s International Mall was pitched to the community. They really did try to convince us that the mall would be a mecca for shopping tourists from other countries, who would be bused from the Tampa airport to the mall to shop and then right back to the plane. Uh huh. I think this kind of delusional thinking is what irritated me most about Tampa. It was never enough to just be Tampa. It had to be Silicon Beach or Orlando or…you name another city. A civic inferiority complex, I guess.

In other news, Macy’s was having a sale and offered a few bins of name-brand purses at 30% off. Women were huddled two-deep around the bins there and in the costume jewelry department. Clawing at the wares. A scene I’d never seen at Macy’s.

It looked like some Hong Kong version of Filene’s basement.

The demographic of the South Bay shifted significantly while I was busy living in Tampa and the Monterey peninsula. Coming from those mostly lily-white communities, at least in my neighborhoods, I’m enjoying the diversity.