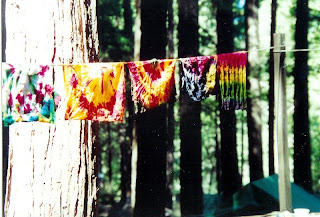 Somewhere, in the Ventana Wilderness near Big Sur, a tiny, rough-hewn cabin sits in a wood. The sun’s out but a fire’s burning in the fireplace. A couple of old hippies live there, stirring the tie dye pot.

This line hangs outside their cabin.

I wrote a story once, in the mid-1990s about a little place near the ocean, where a couple lived. I was pretty specific about what they did every day. What their lives were like.

The story came true. A few of the details were different, but it was largely true.

Back in 1985, I dated a man in Boulder, CO but I lived in Los Gatos CA. I used to wish that I lived in both places.

Ten years later, I got a job that subsequently required me to live in both places.

I’m too much a princess to want to live in a rough cabin, so the vignette I opened with is not a wish. It’s just what came to mind when I found that photograph.

Still, just sayin: you have to be careful what you wish for, because you might just get it.

I find, though, with FLH, that what I am getting is something I’m not used to.

But it is far more than I could ever have wished for.