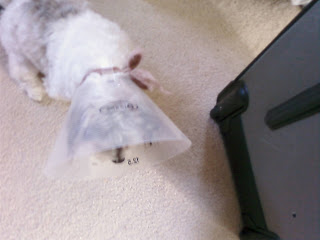 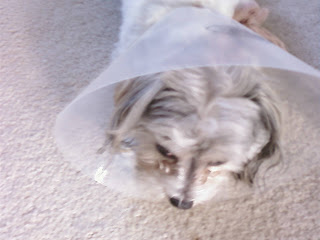 Our boy apparently got into something that made his left rear paw swollen and sore. Vet’s not sure what exactly.

Licking isn’t making it any better.

The vet wants him to wear this. But we are going away for the weekend tomorrow. I won’t leave him in it without 24 hour supervision because he is determined and could choke himself trying to get it off.

A long discussion ensued with the vet.

“Thank you for being honest,” she said. We agreed that he would wear it tonight, since we are home, but we’d remove it before we left tomorrow. If it got worse, the petsitter could take him in. Or we’d bring him in Monday.

I could tell the vet really, really wanted us to keep it on him all weekend.

I really, really wasn’t going to.

However, it became a moot issue 5 minutes ago, when I saw him contort so he could actually get his back paw into his mouth.

If I called the vet, I’m sure she’d give us a bigger collar.

But I’m equally sure he’d Houdini himself out of it in a couple hours.

It’s hard not to root for him. Even though I know I shouldn’t.