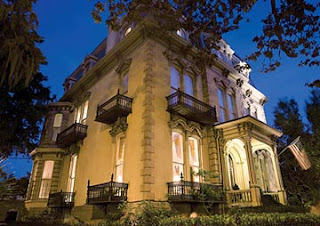 or so they say. It was the ghost house featured in Midnight in the Garden of Good and Evil. And it was the prototype that Disney tweaked to make its Haunted Mansion. You can just about see it at certain angles, although the cartoonists squeezed it up a bit. And as for ghosts: Thank God, I haven’t seen or heard a THING. Thus far.

It’s stunningly renovated, though, maybe the nicest B&B I’ve ever stayed at. The owners of the Hamilton Turner Inn in Savannah are Canadian. Nice people.

And boy, can they plan a breakfast. The food is fabulous, and they make sure you don’t go hungry. There’s afternoon tea, early evening wine and appetizers, and port in the late evening. It’s an extremely civilized accommodation.

I did have a little “accident” in the huge Jacuzzi. I put a little bubble bath in, and when it didn’t respond as fluffily as I wanted, I added more. Then I got in, hit the Jacuzzi jets ON button and pretty soon the room filled with bubbles.

Ahem. Yes, I’ve had a Jacuzzi tub but I’d forgotten what can happen.