Journalism’s Demise & the State of Things 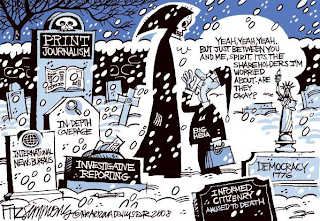 I stopped regularly consuming American news media content more than a year ago, sick of the constant stream of hyped up bad news. With the media increasingly in trouble and many good newspapers disappearing, the news has become all about eyeballs–and eyeballs are attracted by bad news and scandal. Sensationalized. And that’s just local news.

It got tiring. And it still is.

This morning I tuned in to the local 24-hour news channel to check the weather. In the 10 minutes before the forecast, I saw at least six consecutive segments about murder and violence. All local. You’d think Tampa was the violence capital of the country.

Do you ever wonder why the US has so much more violent crime than Europe, for example?

And we are the only developed nation with a death penalty.

Side note: It’s purportedly about “deterrence” but actually, it’s about the Biblical eye for an eye. (If you haven’t guessed, I don’t think it deters a thing and am against capital punishment.)

Then, on HLN (the rebranded CNN Headline News) I saw an excerpt from Tyra Banks’ program in which she interviewed the teenager father of Sarah Palin’s grandbaby about how Palins daughter doesn’t allow him to take care of his son.

If this news, what does this say about our society? Do people really want to consume this kind of thing?

We’ve seen a sea change in American journalism over the past 40 years and not in a good way. Although some would say that the media are simply reflections of our population, I think they have a higher calling.

Too bad they gave that up.

Seems to me that the media have failed to remain relevant and that may well be the root of the demise of some newspapers.

Give me a half hour of BBC news or some NPR any day. No accident that they are not commercial operations and don’t really have to pander to the lowest common denominator to make a buck.

Another side note: In the Bush-Cheney days, a statement like that would be considered un-Amerikan. That’s because you were either “with us or against us.”

But we’re in the Obama nation now and it’s ok to have a dissenting opinion.

And yes, I’m very crotchety about all this. Especially about the 8 years under the imbecile and his evil vice president. I know I should be thankful they’re out of office, and I am.

But they’ve left us in a fine mess and what’s worse: their 8 years was living proof of the gullibility of many Americans and how little critical thinking our society does any more.