Juju, bad or at least strange 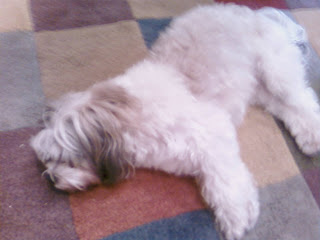 That’s what FLH calls him.

So not even halfway through the conference I was attending, Riley’s daycare called and said that he was just not himself. Since I had felt the same thing, I left the conference, got his vet on the phone and headed off to get my boy.

Although the Rilester had lost a full pound this week, from his heavyweight 9.5 lbs during his recent physical, Dr. Stu said “no temp, no tummy sensitivity, seems bright enough now, lungs/heart clear–I can’t take your money.”

Let me pause a moment to say how much I love Dr. Stu. I do.

Anyway, I prepared the Rilester a gourmet meal and he finally ate. Although he really has not been himself this afternoon. A…malaise.

This always worries me just before a week-long California trip.

However, he is eating, and well enough to be the dog of discriminating tastes that he is. He just cherry-picked the steak out of his dinner tonight, leaving the chicken, rice, cheese and, of course, THE DOG FOOD. He has now assumed an uncharacteristic position of rest.

His sweet Auntie Helen has offered to be an emergency contact if there is any question about how to get him to the vet while I am gone. However, I am hoping this won’t be necessary because she has a seriously ill dog, herself, Riley’s buddy, Lil Dude, and has more than she can say grace over right now.

There must be some sort of bad dog ju-ju going around, because FLH’s oldest dog, the sweet Tinker, age 14, was just tentatively diagnosed with Cushing’s Disease, pending additional blood tests.

(Yes, between the three of us and our dogs, we probably spend more on vet bills than some do on their kids.)

Anyway, FLH had been concerned about her failing health. Even though 14 is old for any dog and miraculous for one that they found on a street and nursed back to health. With various ailments, her long life is a testament to the happy and loving care she has gotten. Further blood tests will be done next week, as she is not in extremis.

Losing any pet is a heartbreak, no matter how old. Our pet companions become beloved family members and for those of us without children, they ARE our kids. I know that Riley is always my baby, even when he is at his naughtiest.

Just the fact that he let me take this picture without stirring concerns me. But he did see his vet. And I will monitor him tonight and tomorrow.

In fact, instead of taking him to the kennel in the a.m., I will keep him home and see how he is.

One comment on “Juju, bad or at least strange”