Keith Haring: gone but still with us

This normally sits outside San Francisco’s Moscone Center and is temporarily at the museum. Haring believed sculpture should be climbed on, interacted with.

If you don’t know Keith Haring by name you certainly do by his art, which is original and vibrant and super-recognizable. He was an amazing artist who died in 1990 too young–31–from AIDS. But he left a huge body of work, surprisingly large for someone who left us so young..

This is the DeYoung, one of the Fine Arts Museums of San Francisco. We are members and enjoy visiting as often as we can.

The DeYoung Museum in San Francisco’s exhibition of Haring’s work has been one of its most popular, as you might expect.  I loved its vibrance and vitality. 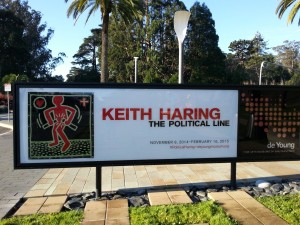 How about a walk through the exhibition from the comfort of your home? I knew you’d say yes. So let’s start. This exhibition is the first to look at Haring’s work from a social justice perspective, so view these images with that in mind. Also, Haring didn’t title many of his works. Well, he DID: they were called Untitled. His thought was that the art lover should make his or her own interpretation.

At first, I found it frustrating, because I’m lazy and don’t want to figure things out. Love me a good crib sheet. But as I walked through his works, I came to appreciate having my own thoughts about what I was viewing. 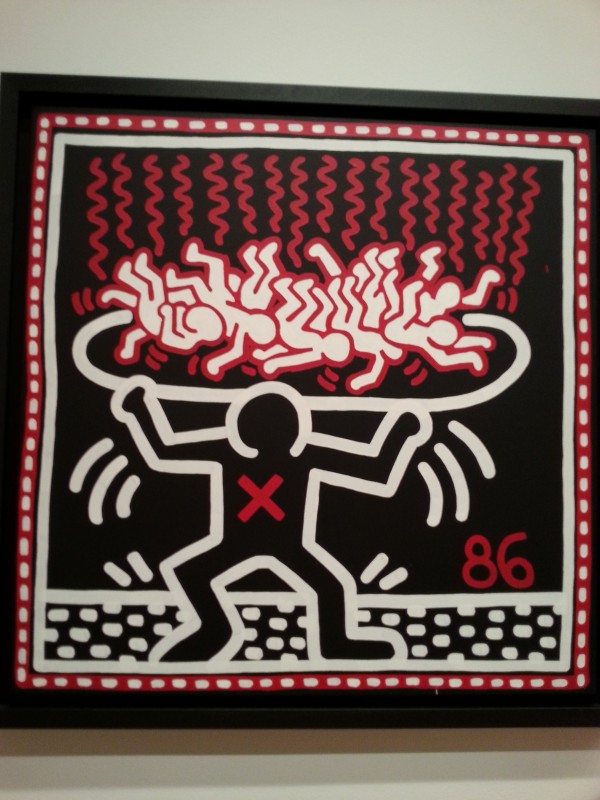 “Drawing is basically the same as it has been since prehistoric times. It brings together man and the world. It lives through magic.” ~Keith Haring in his Journals.

I’m sure you recognize his work, right? Haring began with public art in subways, white chalk drawings that made political and social statements. From there, he simply spread his wings. He said he wanted to break down barriers between high and low art and he did. 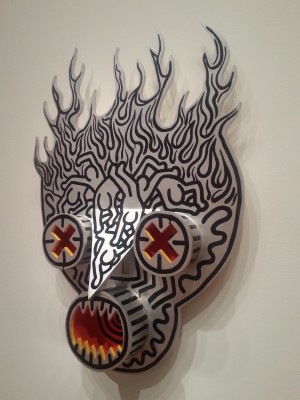 We know his paintings, but I wasn’t aware of how many different media he worked in.  It’s hard to just flip through his work–it requires the viewer to look closely at all components and decipher the message. Some are easier to discern than others.

Haring was an activist, concerned with racism, apartheid, nuclear proliferation and so much more. 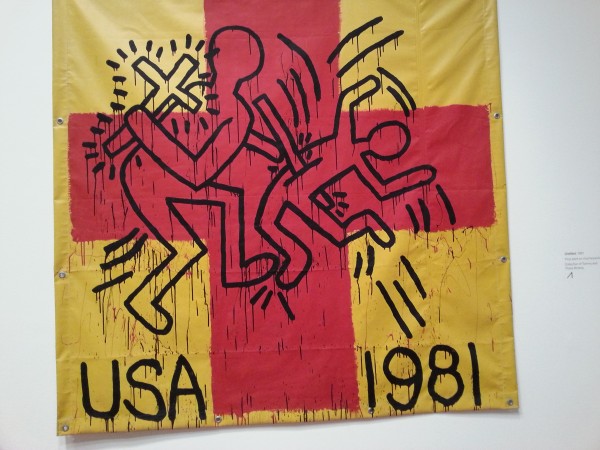 “Art becomes the way we define our existence as human beings.” ~Keith Haring in his Journals.

While the casual observer might think his iconic cartoons are just delightful and giddy figures, Haring used his art for advocacy. 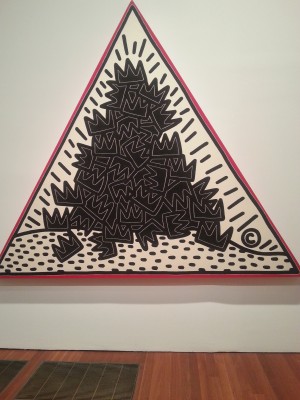 A Pile of Crowns for Jean-Michel Basquiat, 1988

Above, an homage to the artist, Basquiat.

Nothing subtle about this stabbing. 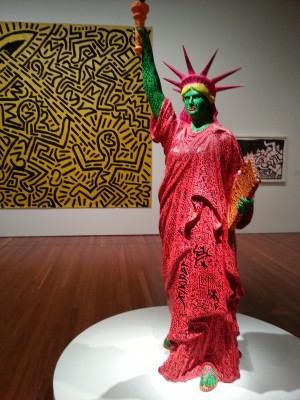 You can’t see that a black lightbulb has replaced her eternal flame.

With this symbol of freedom, Haring asks questions about where we are with freedom today. 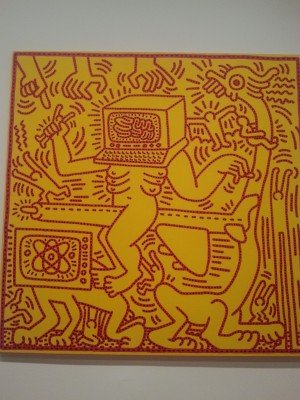 Brain replaced by a computer…see that? 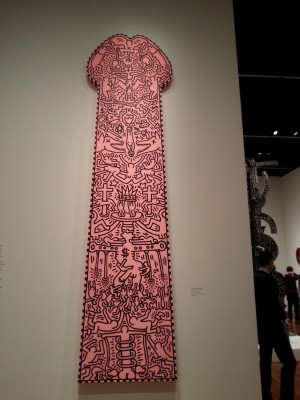 Haring viewed sex as an important part of his life, and his art reflected that. But not always in positive way, for obvious reasons. When sex becomes a killer, well…. 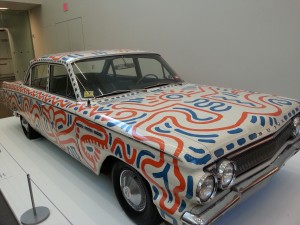 “Everything goes in circles and repetition is a law of nature.” ~Keith Haring in his Journals.

Back in his day, the work was ubiquitous. Love this car. 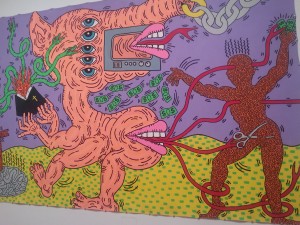 There’s a real Hieronymus Bosch feel to some of his pieces. 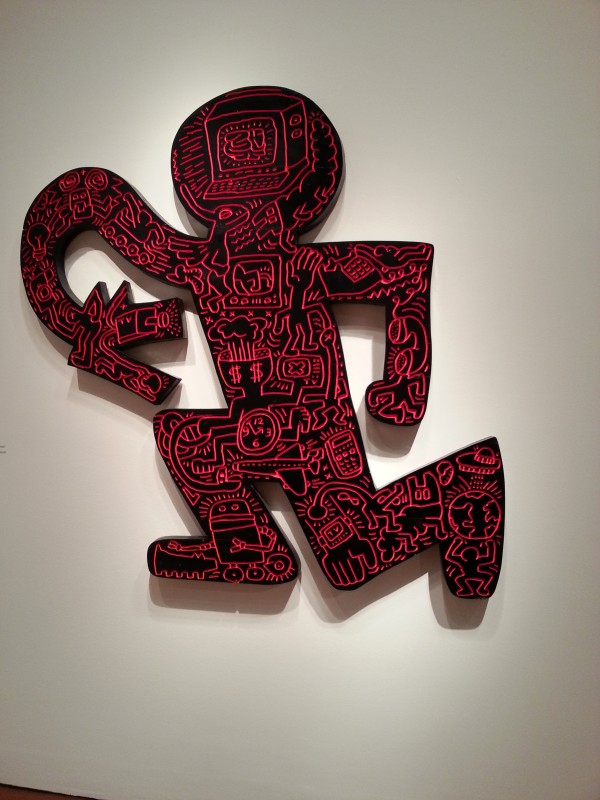 If I were to purchase a piece, it would be this one.  Even as he makes political and social statements, his work has a real vitality to it. 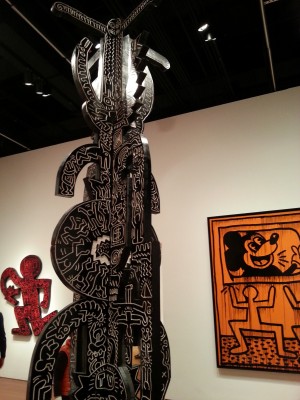 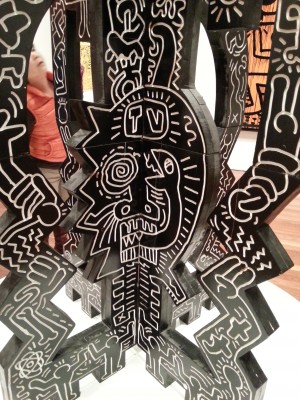 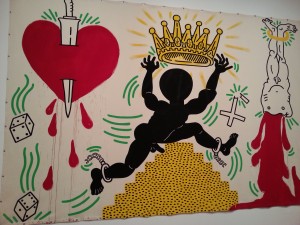 I’ve seen his work and this exhibition referred to as “politically savage.” 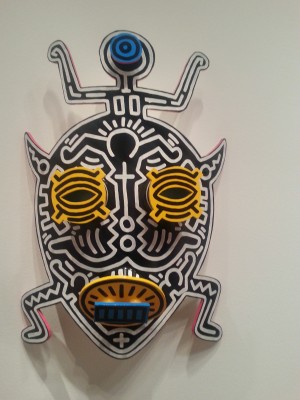 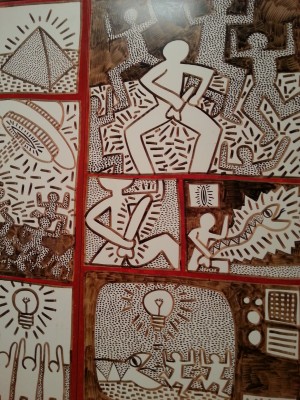 When a man watches his community die of AIDS –and knows that he will die that way, too, he can not remain silent. 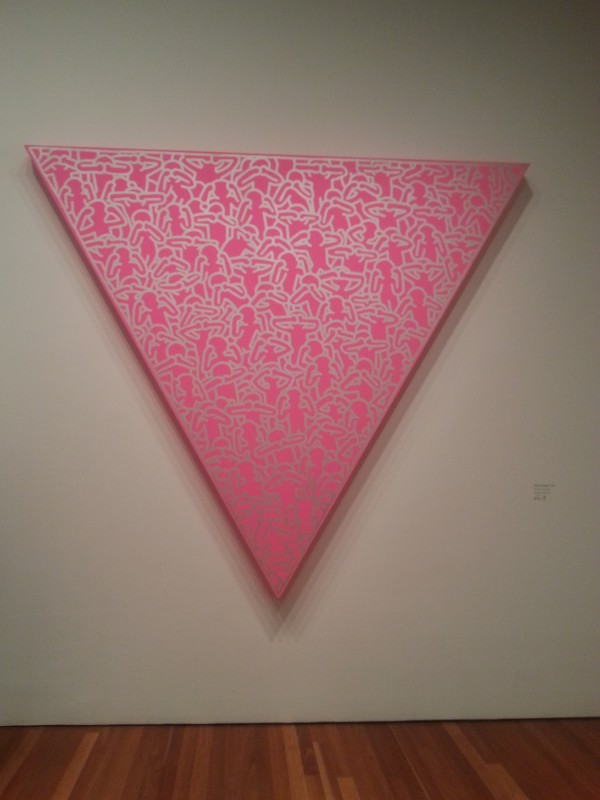 Silence=Death/Keith Haring. “I am making things in the world that won’t go away when I do. The world will, however, go on without me being there to see it, it just won’t be ‘my’ world then.” ~Keith Haring in his Journals.

AIDS was the subject of his later work and most powerful were his images of horned sperm. These figures above are covering their eyes, ears, mouths and are meant to represent the silence that surrounded AIDS at the time and how people with AIDS felt oppressed and invisible.

Although he was an advocate of safe sex, he was diagnosed and died of AIDS within just a few years. It was the scourge of the gay community in the 1980s. 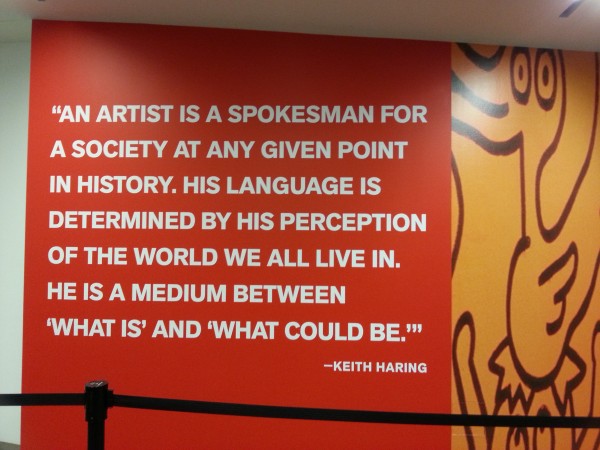 Thank you, Keith Haring, for sharing so much of your gift with us.

Everything, every memory becomes invaluable, timeless. But the “things” will survive me, the memories will die with me.” ~Keith Haring in his Journals.

24 comments on “Keith Haring: gone but still with us”