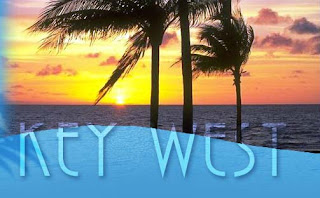 I took Riley for a short walk this morning. It’s overcast, about 75 degrees, with one of those soft, humid breezes rustling the palm fronds. It reminded me a little of a Key West December.

The High Tech exec and I spent four consecutive Christmases in Key West in the mid-1990s, a week and sometimes two, renting cool houses and bringing our two cats to one of the houses. (Here’s a story about the plane trip with cats that originally ran on abc.com. http://www.elliott.org/the-travel-critic/pets-on-planes/

We’d cook great meals, bicycle around, drink coffee at Baby’s and have breakfast at a French cafe. Or we’d drive up to Marathon Key to eat oysters, drink beer and watch the sun set at Shuckers.

All the tourists would troop down to watch the sunset, either on the beach near the airport or down at the pier. Once I saw the exact same busker down at the dock that I’d seen the previous summer in Portland, OR. If I remember correctly, he had a cat that walked a tightrope. Or something like that.

It was before the Weather Channel became ubiquitous, and you could get NOAA broadcasts on Key West TV. I can still hear the sound of the announcer’s voice giving the marine forecast in that official-government-recording tone. It was on a continuous loop and for some reason I was riveted to it and it came to represent that no-agenda holiday, after months of hard work in Silicon Valley.

There was a languid feel to December in the Keys, casual, lazy island days. Silicon Valley wss a milion miles away. The only thing that existed was the soft winter breeze, enough humidity to know we were in Florida… and clouds.

That’s how this morning feels.