Kissin’ the stone, then Dublin 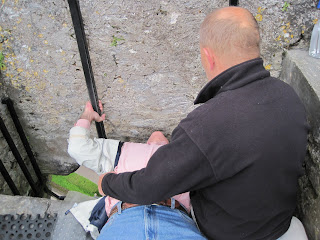 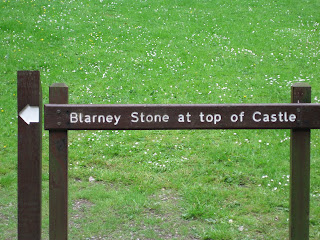 If ever there was someone who did NOT need more of the gift of gab OR extra ability to playfully deceive, it’s my husband.

And yet, he just had to kiss the Blarney Stone.  Here’s proof.

Yes, that’s Michael, upside down, laying one on the Blarney Stone. That guy’s holding on to him so he won’t fall 100 feet. Ok, maybe 75 feet.

I can only imagine what is in store the rest of our life. 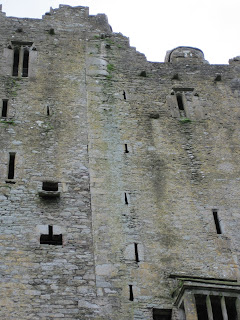 Yep, looks like every other Irish castle we’ve seen so far.

We left the bucolic countryside reluctantly today and boarded a train around noontime for Dublin. After a standard train meal, which is to say mediocre, we arrived.

The city’s got a great vibe.

Did you know that Handel’s Messiah, one of my very favorite pieces of music, was performed here for the very first time back in the 1740s?

That there is no separation between church and booze:  booze money restored both St. Patrick’s Cathedral and Christchurch?

That the locals call the Millenium Bridge The Quiver on the River because it shakes?

That schoolkids hated poet Thomas Moore so much because they had to memorize his The Meeting of the Waters that his statue was positioned over public toilets? Another kind of meeting of the waters, entirely.

I’ll post city sights later on, and lots of them.

Tonight an Irish house party’s on tap, complete with entertainment. It’s supposed to be a raucous good time, and with this group of travelers? Guaranteed! 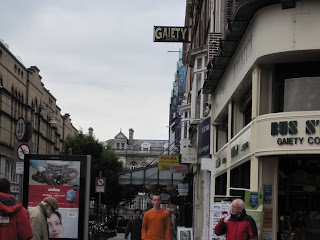 Tomorrow night, a few of us are going to see Oscar Wilde’s The Importance of Being Earnest at the Gaiety.

I mean, why not see an Irish playwright’s play when in Dublin?

I was prepared for a great Irish cast.

Stockard Channing’s got the lead.

We checked in back home and found that our live-in petsitters have renamed our dog.  Little He now responds to “George” and apparently, gets all excited when he’s called that.  Riley has fallen in love with Trish, the more alpha of our two sitters, and when he hears her van alarm go off to signify her arrival he gets all excited.

He is still called Riley.  At least so far.