Laugh your a*s off! 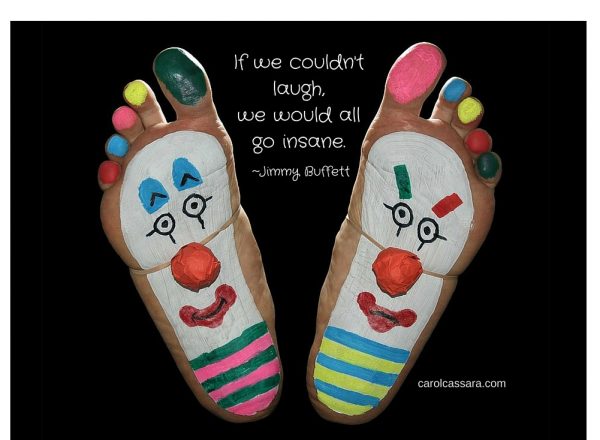 “How do you stay so upbeat and happy?” a friend asked the other day after she and I shared a laugh. “You’re the happiest person I know!”

Well, here’s the truth. I’ve always been this way, pretty much. I see the hilarity in most situations and have never had a significant depression except after my mother died. I’m pretty sure that I’ve been blessed with an abundance of natural serotonin, and that’s just my baseline. Add to that my love of life–every bit of it, the ups, the downs and it betweens. It’s hard for me to stay down for any period of time– I lose patience with myself and am driven to get on with the business of living out loud, to quote Zola.

That’s not to say I’m sane.

I consider myself a neurotic optimist.

Happiness is also a matter of having a sense of who you are and accepting it–the good and the not-so-good. None of us is perfect. And, of course, if you can laugh at yourself, which I do, often, all the better. I just can’t take most things, including myself, seriously, and I blame my parents for that.  You can say a lot of things about my parents, and believe me, I’ve said them all, especially when I was younger. But they were two of the least pretentious people in the world. That’s one trait that I hope I have carried on.

There’s not much in this world so serious that it’s above finding humor in one reason or another, and laughing, even if it’s a rueful laugh. My friends know I’m not a big fan of sacred cows–I like to say I eat them for lunch–but really, what I do is laugh at them.

A laugh is good medicine

The benefits of laughter are many –it really is the best pain medicine, as Norman Cousins proved with an effective pain management and treatment regimen that included watching hilarious comedies and laughing his a*ss off. Here’s what happened:

Told in 1964 that that he had only a few months to live, Cousins devised his own recovery program using his lifelong positive attitude as his baseline. He had always been an optimist, well-known for his kindness  and his robust love of life itself. “I made the joyous discovery that ten minutes of genuine belly laughter had an anesthetic effect and would give me at least two hours of pain-free sleep,” he reported. After that, he’d start watching comedies again, for more pain relief. He died in 1990, 26 years later.

He was on to something earlier than most. Today we know that laughter floods our bodies with endorphins that can relieve pain. It also decreases stress, improves immune function and helps provide resistance to disease.

And I do think that a big dose of healthy laughter keeps us sane. And who knows that better than Jimmy Buffett who captured my life’s motto in: “If we couldn’t laugh, we would all go insane.”

I took off for a weekend last month
Just to try and recall the whole year.
All of the faces and all of the places,
wonderin’ where they all disappeared.
I didn’t ponder the question too long;
I was hungry and went out for a bite.
Ran into a chum with a bottle of rum,
and we wound up drinkin’ all night.

It’s those changes in latitudes,
changes in attitudes nothing remains quite the same.
With all of our running and all of our cunning,
If we couldn’t laugh, we would all go insane.

[Chorus:]
These changes in latitudes, changes in attitudes,
Nothing remains quite the same.
Through all of the islands and all of the highlands,
If we couldn’t laugh we would all go insane

Reading departure signs in some big airport
Reminds me of the places I’ve been.
Visions of good times that brought so much pleasure
Makes me want to go back again.
If it suddenly ended tomorrow,
I could somehow adjust to the fall.
Good times and riches and son of a bitches,
I’ve seen more than I can recall

I think about Paris when I’m high on red wine,
I wish I could jump on a plane.
And so many nights I just dream of the ocean.
God, I wish I was sailin’ again.
Oh, yesterdays are over my shoulder,
So I can’t look back for too long.
There’s just too much to see waiting in front of me,
and I know that I just can’t go wrong
with these…