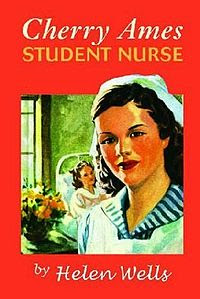 The young daughters of doctors in my era didn’t think of following in their father’s footsteps. Instead, they usually wanted to become nurses, and so did I. An avid reader of the Cherry Ames, R.N. book series, I was a candystriper as a teenager and imagined myself as a nursing school graduate in a crisp white uniform, a stiff, pristine cap and a pin signifying my achievement.

But I could write. I loved journalism and that’s what I decided to study. 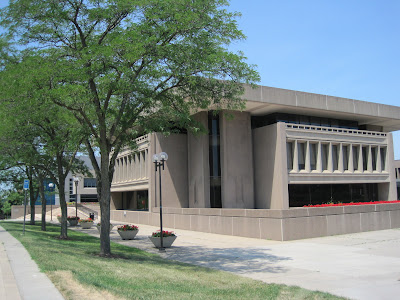 The Newhouse School of Journalism at Syracuse University (above) had a great reputation and it was only an hour and a half away. There was a family tie, too: my mother’s oldest brother was a graduate (and business editor at the Syracuse daily newspaper.) I applied for early admission my junior year and got in. It was the only college I applied to.

SU had always loomed large in my memory, but I had never been back to walk the campus. M and I couldn’t resist taking the 90-minute ride to Syracuse last month. It was, after all, where we met. 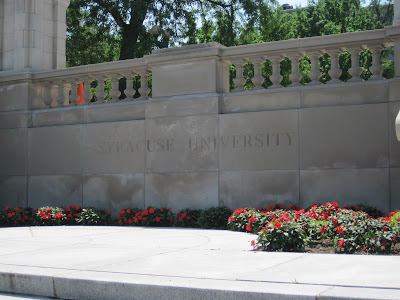 As my first fall semester at college approached, I wanted to go; I was desperate to leave behind the restrictions my parents imposed. I was also scared to death. Still, my parents and I loaded up my dad’s big Oldsmobile and headed east on the New York State Thruway. My new life was starting. It was what I wanted, but I swallowed hard as we passed each Thruway exit. I had no idea what lay ahead. 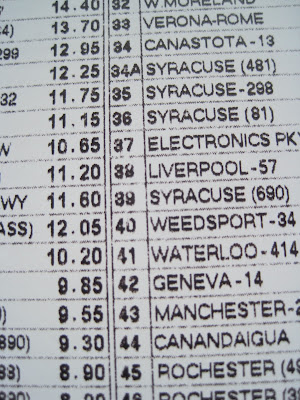 Once I got to campus, my apprehension lasted, oh, maybe an hour. My parents left, I met my roommate and never looked back. I was thrilled to embrace the college lifestyle and all that went with it. The freedom was staggering. 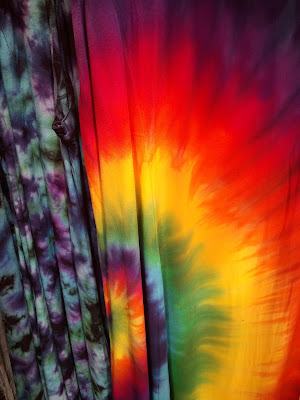 It was 1969 and the Age of Aquarius: all tie dye, love beads, bell bottoms and peace symbols. It was also hashish, pot, LSD and mescaline. It was the life my father warned me about and I loved it. I had left home, alright, in a big way.

I met so many people that fall semester, all kinds of people, all ages. My roommate was definitely going to be a Tri-Delt sorority girl; she was a “legacy,” meaning her sister had preceded her in that house and her acceptance would be a slam dunk. I was more a GDI (God-damn Independent), unwilling to wear pearls and drink tea –but that didn’t mean I couldn’t go to fraternity parties.

I met M. at one of them. I saw him holding court on a bar stool with his ubiquitous beer, the epitome of frat boy, laughing and talking. He looked at me and said “Nice ass,” which actually wasn’t true–I didn’t have an ass at all in those days. I threw my beer at him and before long, we were dating.

It turned out that he was also from Rochester, that I knew his cousins, that we had a lot of things in common. He was the kind of boy my parents wanted me to meet at college: older, from a nice Italian family, from our hometown, smart, with a great future. But he wasn’t as straight as he looked.

It was an exciting time to be at college. Concerts by James Taylor, who was just getting started. Peter, Paul and Mary. Led Zeppelin. Three Dog Night. And drugs, so many drugs. We all did them and the more the merrier. Our usual evening’s entertainment was smoking pot, stringing love beads and cranking up Led Zeppelin LOUD on the stereo. I’d never had so much fun.

My life was–eclectic. I was tasting everything, and I do mean everything. On the one hand, I still had my friends, both male and female, Greek and GDI. I visited my high school best friend at Buffalo and had a sometime boyfriend there. But I was also dating M. I don’t remember it being much of a conflict and we weren’t exclusive during that first semester.

M and I spent much more time together after the Christmas break. He was a Phi Kappa Psi and I pretty much lived in his room at the fraternity house for most of the spring semester. The house was at 113 College Place. It is long gone now, and the fraternity moved to a different house, but this is the general area–his house was toward the right and four down from this Delta Upsilon house. 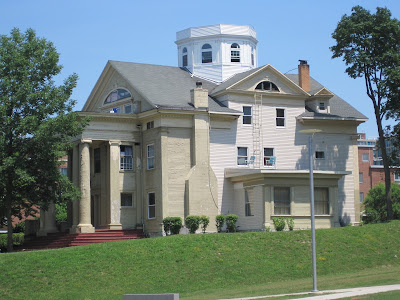 Oh, wait. Classes. You’re probably wondering about them. I didn’t go that often. I did, though, write news for the college radio station and would get up at 5:30 am to walk across campus and report to my assignment. 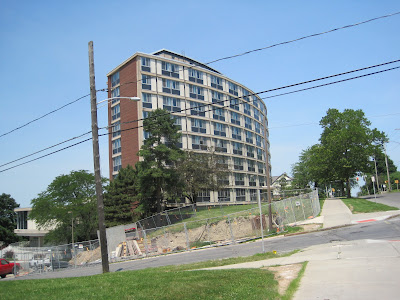 I officially lived in Haven Hall (now under some kind of construction), a women’s dorm that sat atop a hill across from a different lineup of fraternity houses. I still remember my freshman room number: 424.

This was the front entrance (below). I remember tearing up those stairs at once night after midnight to flush my stash of pot down the toilet; we’d heard there was a “raid” in our dorm. 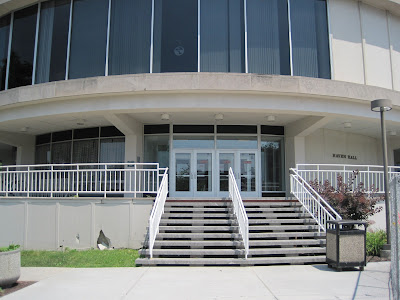 The dorm looked kind of like a toilet bowl and that’s what it was sometimes called. We got our mail in the lobby, photo below. I can still see the gold and glass mailboxes in my mind’s eye. As a journalism major I was required to subscribe to my hometown newspaper, which would arrive in my mailbox at SU a day late.

One afternoon I picked up my mail in the lobby below, opened the Rochester Democrat and Chronicle and saw my grandfather on the front page. His bookie joint had been raided and he’d been arrested. His hat was pulled down low over his brow, but there was no mistaking him. It was Papa. No one had bothered to tell me he’d been arrested, of course. Que scandale!

The mailboxes were on the left, to the right of the reception window. I don’t remember the lobby looking quite like this; I’m sure it’s been re-done a few times since 1971. 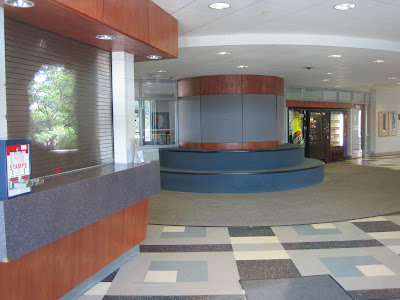 Down the hill from Haven Hall were the splendors of Marshall Street (called M Street): barefoot kids in tie dye tossing their long hair, shaking tambourines, playing guitars and dancing, the smell of patchouli and pot. If you’ve seen movie depictions of the late 1960s, well, this was it.

It was my ShangriLa. 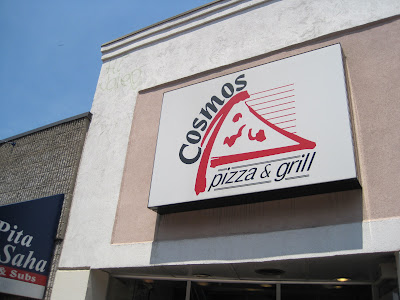 The munchies were often treated at Cosmo’s, the M-Street pizza joint we all went to. 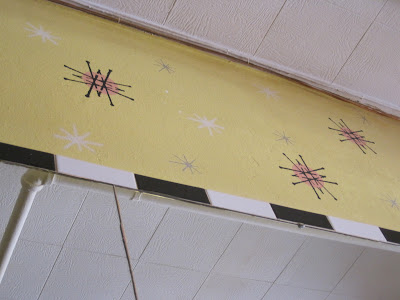 Last month, we found Cosmo’s still there, the same sputnik wall paper we remembered, what looked like the same pizza oven –and from the way it tasted, the same pizza recipe. We couldn’t resist having a slice. 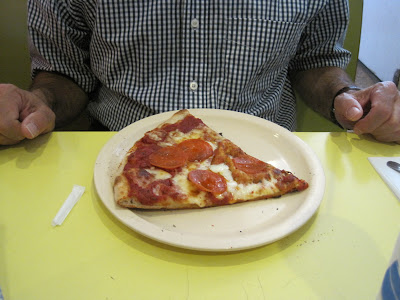 We sat in a booth toward the front and kept looking around and then at each other–it hadn’t changed in 40 years. M offered that we had probably sat together in that same booth 40 years ago when we were first dating. 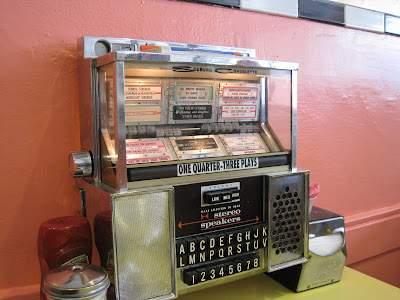 Even better, the jukebox had some of the same songs we’d listened to back then. Cosmo’s seemed to have kept songs from every generation.

My world at Syracuse University was bounded by the campus itself. We didn’t often venture off campus. As underclassmen, we weren’t allowed to have cars and besides, just about anything we wanted was right there on campus.

I remembered campus as huge, green and not urban at all. When we returned last month, it was so much smaller than I remembered and of course, it is an urban university. Funny how perspective changes with time and distance. 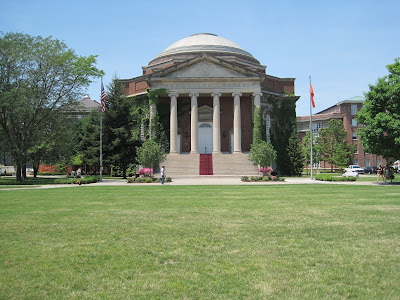 Hendricks Chapel was on the quad. I walked by it every day. If the weather was good, students would be playing frisbee on the lawn or sprawled out with textbooks or just for a nap. 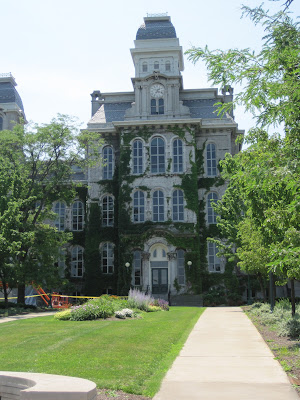 We tried to get in, but were disappointed to find that the doors to the spooky Hall of Languages were locked. 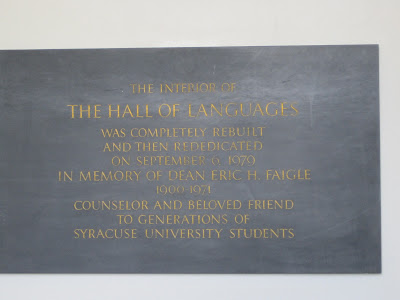 And as it turned out, it wouldn’t have been the same, anyway, as this plaque made clear that the interior had been gutted and rebuilt eight years after I left. I was crestfallen. HL back in the day was dark, gloomy and I swore I remembered taxidermy on display in a glass cabinet on the second floor. Which made no sense. So I wanted to see if it were still there.

The plaque above says “Generations of Syracuse University students” and that says so much. These venerable old educational institutions have served so many different generations and each has its own memories. But one memory that has spanned many generations is that of “The Varsity.” 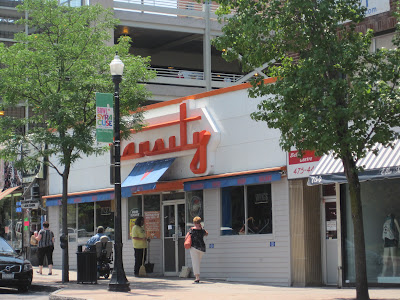 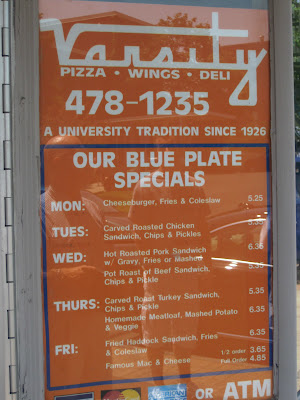 For 85 years, Syracuse students have eaten at the Varsity, and we were no different. We decided to stop by. This is what we found: 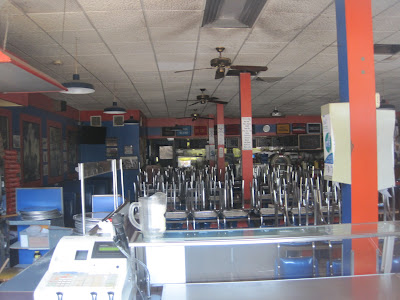 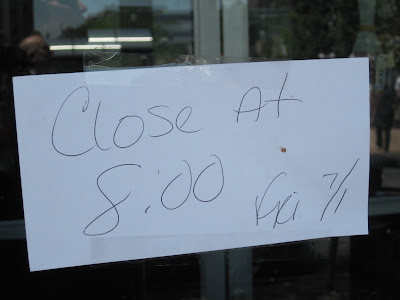 Our calendar said July 5: the Varsity had closed (maybe just for the summer) four days earlier. We stood there awhile peering in the windows, lost in our memories, and then made our way back up Marshall Street.

It was a sad walk. Marshall Street is now a far cry from my tie-dyed days. Here it is, below. 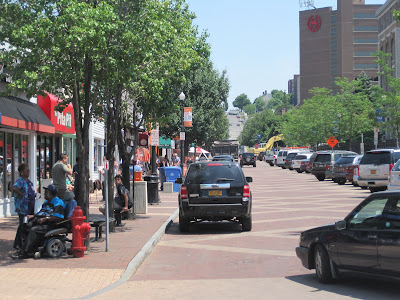 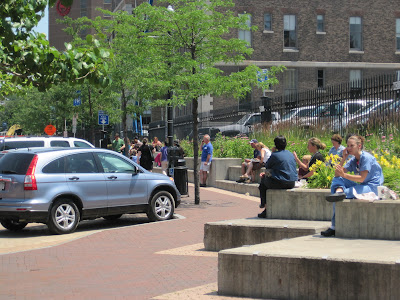 Below, little of the 1960s spirit has been reborn, but with a 21st century twist. (Smoke shops would never be that close to campus back then, if they even existed.) 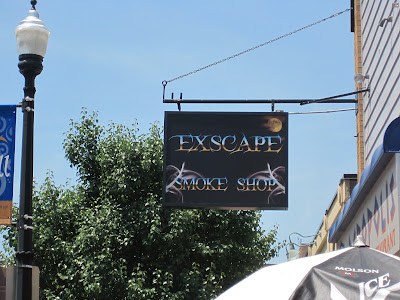 And students today are making their memories here: 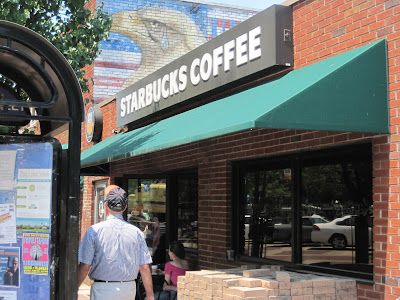 It’s just not the same.

But then, nothing is really the same as it was 40 years ago. Time changes everything.

College was where I started the process of growing up. It wasn’t a linear path. But Syracuse University was where I saw that life could be different from what I saw in my insular home. It was where I met M.

Syracuse University was my first step toward the life I have now and for that, it will always be a place of happy memories.