I think this is very true. It’s certainly been true in my life.

Consider the times when you’ve been asked…or even REQUIRED…to let go of something important.

Maybe it’s letting go of controlling the decisions of a child.

Or just maybe it’s letting go of beliefs–or illusions–you’ve held on to your entire life.

There are so many times in our lives that we’re called upon to let go and often, our sanity depends on how tightly we try to maintain our grasp.

Back in my day there was a saying that went something like “If you love something, set it free. If it comes back, it’s yours. If it doesn’t, it was never meant to be.”

I must admit that I always thought that was a nice, 60s era saying that wouldn’t apply to me. Until it did.  I was forced to let go of my first husband. It wasn’t easy. I didn’t want to. But I finally did. It took all that I had, too. It was difficult. But it got easier in time.

And, believe it or not, 26 years later, there he was. He’d come back! It’s true. We’re remarried now, because we know it was meant to be. 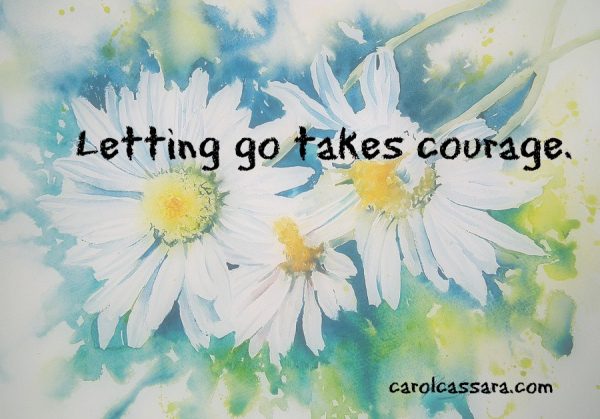 Now, I would’ve been ok if he hadn’t come back. If I’d let go and that was that.  But I believe that he only came back because I had let go all those years ago. I didn’t try to desperately hang on to something that was not mine to keep at that time

So maybe you’re hanging on to something, yourself. Maybe it’s your youth. The healthy way you were in the past.  A job.  A relationship. It could be anything.

Know that I recognize the strength and courage it takes to let go of what is no longer ours. And that I honor the power you have to do just that.