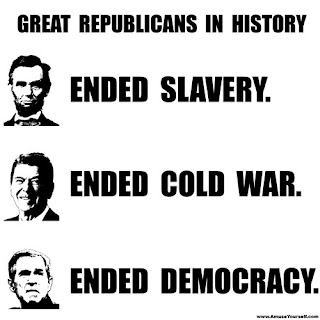 Republicans are out of control.

The idiocy that is Glenn Beck weighed in on the Sotomayor nomination with the usual, intelligent comment we hear routinely from right wing fringe.

There is so much wrong with this statement that I don’t know where to start.

And then, the sexism. Judge Sotomayor is a woman. “Hispanic chick lady?” Degrading. Demeaning. Disrespectful. Disgusting. I doubt we’d hear the same level of name-calling if she were a man. Oh, there would be insults. But not this low.

Why is it that the right wing spokespersons are always the ones who can’t argue intelligently, so they have to sling insults, with both spittle and vitriol flying? Glenn Beck sounds like a crazed elephant, shrieking and trumpeting out of control. Why aren’t they calling for his head?

The Republican Party is becoming a caricature of itself.

I’ve never liked Glenn Beck. I have always thought he was a windbag. And he has no equivalent on the left. None. Progressives don’t seem to need to resort to petty insults to make points.

Glenn Beck’s a jerk. But today I’ve come to see him as a symbol of everything that’s gone wrong with our political system.

He should be fired.

Or at the very least, do a stint in some kind of rehab center for crazed elephants.