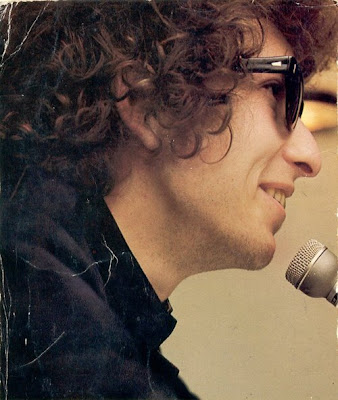 I had the pleasure of watching No Direction Home, Scorsese’s four-hour documentary on Bob Dylan, recently. It was as good as his George Harrison film, which I saw not too long ago, too.

M. and I sat watching, deep in our own private thoughts, singing along with the familiar songs.

I’ve been doing quite a bit of reading about Dylan’s life in recent months, so the airing of this show was perfectly timed. But it’s definitely long. At the end, I felt like I’d been in a Bob Dylan immersion zone.

Dylan’s talent is so huge and his body of work so impressive it’s hard to pick a representative tune.

But if I had to pick one that reflects my thoughts today, this is the one. Beautifully expressive lyrics, great tune…I can close my eyes and be in the world as it was in the past. Step back with me. And, do you have a favorite Dylan tune?

My love she speaks like silence
Without ideals or violence
She doesn’t have to say she’s faithful
Yet she’s true, like ice, like fire
People carry roses
Make promises by the hours
My love she laughs like the flowers
Valentines can’t buy her

In the dime stores and bus stations
People talk of situations
Read books, repeat quotations
Draw conclusions on the wall
Some speak of the future
My love she speaks softly
She knows there’s no success like failure
And that failure’s no success at all

The cloak and dagger dangles
Madams light the candles
In ceremonies of the horsemen
Even the pawn must hold a grudge
Statues made of matchsticks
Crumble into one another
My love winks, she does not bother
She knows too much to argue or to judge